Still Katatonic After All These Years 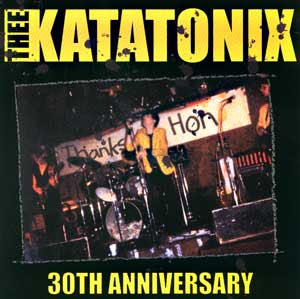 Forward into the past…

Adolf Kowalski just mailed me this latest “new” Katatonix CD – a collection of choice singles (and one new “bonus” track) by my old band’s best lineup of Kowalski and Mr. Urbanity and various bass players and drummers (but mostly “Beautiful” Tony Belle on bass and “Big” Andy Small on the skins) – in honor of the 30th anniversary of the group’s founding in 1979…(though the groundwork for the band was set in motion, amidst puffs of hemp and gulps of Blackberry brandy, in the fall of 1978 in Towson State University’s wooded “Glen” – where freshman Ross “Adolf Kowalski” Haupt, freshwoman Katie “Katatonic” Glancy, and jaded junior Tommy “Gunn” Warner decided Punk Rock was the answer to their dying-of-boredom-in-the-‘burbs collegiate blues – we didn’t start playing out until our debut/debacle at Towson’s Oddfellows Hall in April 1979.) Katie Katatonic and I (Tommy Gunn) are not on this CD at all, and that’s why I like it…in fact, though Adolf probably didn’t appreciate it at the time, Katie and I did him a big favor by quitting Thee Katatonix at the end (literally, as it was New Year’s Eve) of 1980. When we stopped playing music, that’s when the band really started to play music. (I’d like to think the Thanks Hon title is a subconcious salute to the Tom and Katie bailout. If so, you’re welcome – we did it all for you!)