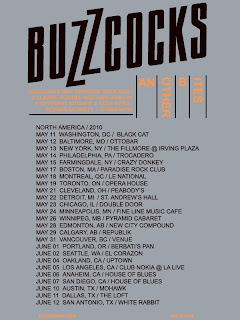 Unlike so many rock bands from the ’70s, Buzzcocks remain more than just nostalgic entertainment for aging rockers – they still maintain a sizable fan base of young devotees as well. Pete Shelley’s famous line about “Nostalgia for an age yet to come” may well refer to their ability to add new fans – across a diverse age range – to the Buzzcocks template. Case in point: the day after seeing the Ottobar show, Amy and I were having lunch at Atwater’s when our Twentysomething waiter spotted my Buzzcocks “Another Bites” t-shirt and said, “Hey, I was there last night; great show!”

The Buzzcocks sound may be rooted in late ’70s pop-punk, but as the five albums – Trade Test Tranmissions (1993), All Set (1996), Modern (1999), Buzzcocks (2003), and Flat-Pack Philosophy (2006) – that Pete Shelley and Steve Diggle have recorded under the Buzzcocks moniker since their 1981 breakup prove, it’s far from a static template (like, say, The Ramones – who picked one sound and never deviated from it, great sound though it be). While the trademark fast tempos and buzzsaw guitars are still there at the core of the sound, Shelley and Diggle have added a lot of new colors to the palette over the years, even toying with snatches of electronica at times. And a recent listen to 2006’s Flat-Pack Philosophy has resulted in me not being able to get “Credit” out of my mind – not just because it reminds me of the financial hole I’ve gotten myself in, but because it’s clever lyrics and melody could easily have fit in on Singles Going Steady from the Glory Days. 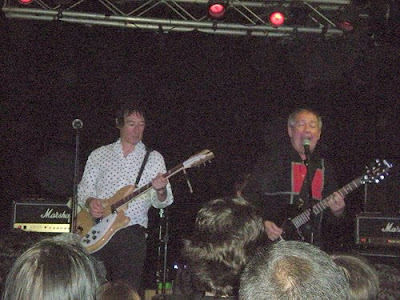 This year’s edition of the Buzzcocks added a new rhythm section in the form of bass player Chris Remington (who’s played in Diggle’s solo band Flag of Convenience – and is a veritable Steve Winwood lookalike!) and drummer Danny Farrant. As with the vintage-era ‘cocks bassist and drummer – Steve Garvey and John Maher – they also happen to be the best-looking and have the best hair. (Ah, youth, there is thy sting!) The newbies replaced bassist Tony Barber and drummer Phil Barker, who had been ‘cocks from 1992-2006. 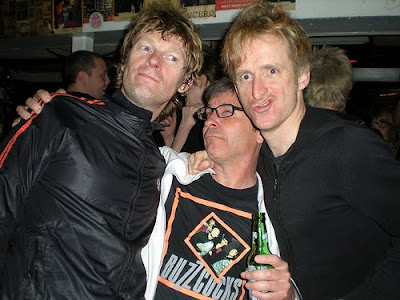 The 22-date North American “Another Bites” Tour is so named because the Buzzcocks were playing their first two albums – Another Music in a Different Kitchen (1978) and Love Bites (1978) – in their entirety, following an increasingly popular touring trend that has seen bands as diverse as Devo and Megadeath play live sets of entire classic albums, more in less in their original track order.