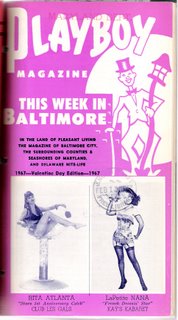 While we’ve all heard of Hugh Hefner’s famous girlie mag, Baltimore’s Playboy Magazine (shown left) is relatively unknown. Alternately known as This Week In Baltimore: The Playboy Magazine or The Playboy Presents: This Week In Baltimore (with the subheading “In the Land of Pleasant Living, The Magazine of Baltimore City, The Surrounding Counties & Seashores of Maryland, and Delaware Nite-Life”), it appears to have been a events calendar that was published from November 1, 1947 (pre-dating Hefner’s December 1953 Playboy debut by a half-dozen years) through the late 60s by one Bernie Lit, who also wrote its main column “Baltimore Nite-Life” (subheaded “MEN, MAIDS and MISScelaneous LITerature) and advertised in its pages looking for new talent (“TOPlus Go Go Girls Wanted”) for the “Bernie Lit Theatrical Agency” of Water Steet. The magazine’s logo (which was also used to illustrate Bernie Lit’s column) was a drawing of a tipsy “Man About Town” dandy in a tux and tophat who steadied himself with a walking stick in one hand while his other arm was wrapped around a lampost (as pictured above left).

This entry was posted in "The Block", Burlesque, Gayety, Sex. Bookmark the permalink.