His Name Is Not Legend: It’s tENTATIVELY, a cONVENIENCE “Let’s face it! I’m from Baltimore. That translates into WORKING CLASS SUBHUMAN MORLOCK.” – tENTATIVELY, a cONVENIENCE

It seems everyone in Baltimore who is even remotely associated with the arts or its cultural underground has a story about Michael Tolson, the man with a brain tattooed on the back of his scalp (in offset green and red for the benefit of those wearing 3-D glasses – see it starring in his “Brain Waves Goodbye” YouTube video) who is better known as “tENTATIVELY, a cONVENIENCE” (a name he chose to answer the question “What’s your name?“), “Tim Ore” (as in the imperative statement/proper noun “BalTimOre”), and/or “Monty Cantsin” (as in some convoluted “neoism” reference too taxing for my little squirrel brain to comprehend – one reviewer likened defining neoism as akin to a dog chasing its tail). Or, for convenience‘s sake, simply “tENT” for short. 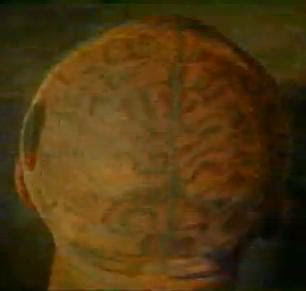 tENT: a brain in vein

“Irreverent and even obnoxious, habitually wearing a jump suit made out of zippers, tENTATIVELY a cONVENIENCE, (the man with a brain tattooed on his scalp,) has been one of Baltimore’s premier outsiders for over a decade,” Dan Schiavone observed in 1992, noting that he was best known “for his confrontational and often belligerent performances, films, and videos…” That sounds about right. Though his name may not be legend to the mainstream, his deeds and his work certainly are legendary to those in the know – the tENT cognoscienti. 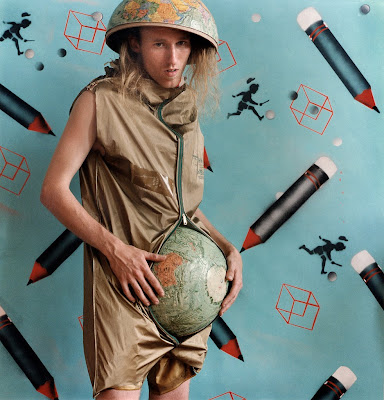 GROWING PAINS: a pre-“tENT”ious Michael Tolson in costume of his design, School 33 studio. Baltimore, MD. Circa 1979. Backdrop and photo by Paula Gillen.

Although he’s written at least 10 books, directed 50+ films, published a shitload of articles and reviews both on paper and online, and given roughly 400 film-music-spoken word performances over the course of his career, tENT considers himself a mere footnote in the greater scheme of things (much to his discontENT). In fact, footnotes is the name of his 500-page (unnumbered) book that archives his life’s work and whose stated purpose is “to bring the picture together somewhat.” Or, as the book jacket proclaims, “footnotes collects 32 years worth of material by the jack-off-of-all-trades known (sometimes) as tENTATIVELY, a cONVENIENCE. It rewrites, comments on, & excerpts from his 1st 9 books – covering everything from concrete essays to mad scientism to practicing promotextuality to scripts to rebuttals of critics to lists to autobiography, etc.. using texts, drawings, photographs, etc.. A MASSIVE compilation relevant to film & video making, performance, experimental language use, neoism, & much, MUCH more..” Besides being a valuable archival guide to tENT’s massive body of work, it’s also a sometimes bitter-toned argument about why he matters – tENT definitely has a major chip on his shoulder about his lack of recognition by his artistic peers and this may be one of the reasons he left Baltimore (where he felt artists were treated as “working class subhuman” morlocks) for Pittsburgh – which despite being another working class city has an arguably much higher profile arts scene (e.g., the Warhol Museum, the Carnegie Museums, etc.)

Continue reading “His Name Is Not Legend: It’s tENTATIVELY, a cONVENIENCE” at Tom Warner’s Accelerated Decrepitude.