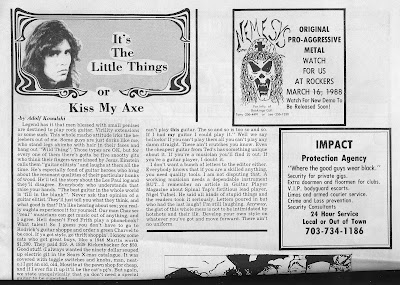 “Back in the ’80s, I used to love reading Adolf Kowalski’s column in Maryland Musician. I used to clip ’em and save ’em each month, but can’t seem to find any these days. I think they were discovered by the stink bugs and squirrels in my attic who lacked an appreciation of fine literature (except as snacks). I did manage to salvage this column from 1988 called “It’s the Little Things or Kiss My Axe,” wherein Adolf says you don’t have to have some tricked-up Guitar Magazine-lauded superguitar to be superbad; anything will do as long as it’s got six strings. (I was gonna say, “and know how to play,” but Half Japanese dispelled that fallacy!)”