Posted on October 1, 2013 by almosthipguy Though it sold only 26 copies in 1968, “Boa Constrictor and a Natural Vine” is now a coveted acid folk collectible.

Back in 1968, Baltimore’s George Figgs and Ben Syfu recorded a brilliantly bent psych curio called Boa Constrictor & A Natural Vine for the Vanguard label’s newly minted Apostolic subsidiary. At the time of it’s release, it sold an incredible 26 copies and has since remained largely unknown to all but a few obsessive collectors. Last time I checked, George & Ben‘s lone album wasn’t even listed on discogs.com

It says a lot about the relative obscurity of Boa Constrictor & A Natural Vine that Vanguard’s recent double LP archival excavation Follow Me Down: Vanguard’s Lost Psychedelic Era (1966-1970) didn’t include a single track from the album even though their five-minute epic “The Devil & the Ace of Spades” (listen below) would’ve certainly been a highlight of the set. Here’s the lowdown on George & Ben: 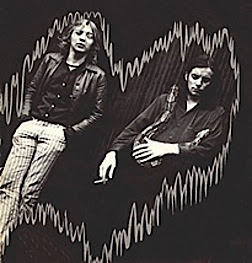 George Figgs is a painter, film historian and projectionist from Baltimore, Maryland who is a longtime  member of John Waters‘ ensemble filmmaking cast (he’s Jesus Christ in 1970’s Multiple Maniacs) and the founder of the Orpheum art house cinema. But like just about every other US teen in the mid 60s, Figgs had been working on some song ideas with stadium-sized dreams. Eventually he decided to head to New York with his guitar-playing sidekick Ben Syfu to see if there was any interest.

In January of 1968, they turned up at the residence of Nic Osborn who was the viking-costumed elevator operator at Apostolic, a state-of-the-art recording studio in downtown New York which had an offshoot label subsidiary of Vanguard Records. Apostolic Studios – named for the custom-built twelve track Scully machine at the heart of the operation – was founded by John Townley in the spring of 1967 and would later play host to Frank Zappa & The Mothers of Invention, The Fugs, The Critters, Grateful Dead and the Silver Apples,  It was Osbourn that brought George & Ben to the attention of Apostolic A&R rep and producer Danny Weiss who in turn passed the recording assignment to budding engineer John Kilgore. Now a respected New York studio owner with an impressive list of production credits, Kilgore recalls how the George & Ben album came together.

“George & Ben were hanging out at Nic’s apartment,” remembers Kilgore, “trying to get something going with their music career, albeit in a pretty stoned-out desultory fashion. Danny tried to make a recording or two with them and for whatever reason, it just wasn’t happening. He was going to let them go but I begged Danny for a chance to record them because I thought I could get something out of them.”

When Kilgore ran into the same problems Weiss was having in the studio with getting George & Ben to focus on tracking, he suggested a change of venue, someplace without the distractions of downtown New York. A secluded farm in rural Maine would be perfect and by chance, he knew of one that would be vacant in September.

“My high school bandmates Sean Hutchinson (bass) and Larry Luddecke (organ) were in a group called The Far Cry with singer Jere Whiting and it was my connection to them that helped get The Far Cry signed to Apostolic. Jere’s parents were professors at Harvard – at least one of them was – and they had the place up in Searsmont they used as a summer home. George & Ben were pretty energized by the small successes we had up there. “The song ‘Little David,’ the lead track on Boa Constrictor came out of that trip, as well as the outdoor weirdness. When we came back to New York, they put a bit more effort into getting things done. That’s when the other tunes happened.” 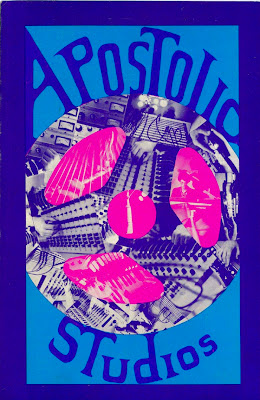 Figgs’ wickedly trippy wordplay backed with Syfu’s bent blues backing makes for an otherworldly getdown and Kilgore was there with his trusty Nagra to capture it all. A few uncredited overdubs added by Far Cry guitarist David Perry, saxophonist Dick Martin and drummer Victor McGill back at Apostolic – particularly on the album’s masterstroke “The Devil & the Ace of Spades” – further enhance the haunting alone-in-the-woods vibe laid down in Maine.

“The Devil & the Ace of Spades was initially planned to be just a guitar and vocal number,  with maybe some drums added later. But we recorded the tune on the multi-track using scrap tape, and there just happened to be a track of someone playing an Indian-style Qanun (like a cross between a dulcimer and an autoharp) recorded in the other direction. After we had laid George’s guitar and vocal down I happened to push up the fader on that track and behold –  spooky backwards noise! It’ was in the right key so it worked on almost the whole track. I put lots of reverb on it and just faded it out where it doesn’t work.

“Dick Martin heard it, and immediately wanted to blow some saxophone on top of it. He did a great job in one take. We momentarily thought about putting on some drums but decided it was perfect just the way it was.”

What completes the package is Phoebe Stone‘s colourful arwork which is really everything you could hope for in a late-60s loner/stoner psych sleeve. Now an acclaimed children’s book illustrator and author, Stone was still very much an unknown when she was hired to come up with a suitable visual counterpart to George & Ben’s fiendishly freaky debut.

“Susan Sewell, the girlfriend of Danny Weiss at the time, was in charge of graphics at Vanguard Apostolic. She would  oversee the artwork for various Apostolic projects but Vanguard had the final word on almost everything. Susan suggested a bunch of ideas to George and Ben, and they grudgingly accepted the work of Phoebe Stone who was the girlfriend of Apostolic engineer Randy Rand who helped build the studio. George & Ben would have preferred  using George’s own artwork, but that was too out-there even for Apostolic. It’s a shame because George’s stuff is uniquely beautiful and would have made a stunning cover.

“The sleeve layout was put together by Jules Halfant, who was the Art Director at Vanguard and designed most of the label’s album covers (Joan Baez, Tom Paxton, Doc Watson, Buffy Sainte-Marie, John Hammond, Junior Wells, etc). Wonderful man, but trippy was definitely not his style. The back photo, which was taken on the roof of the Apostolic building at 53 E 10th Street was deemed too grubby for Vanguard, so they blocked out the  rooftop scene and surrounded George & Ben with the squiggly toothpaste which horrified all of us. And instead of using Phoebe’s art for the whole front cover, they inserted more conservative Vanguard-like graphics along the left side, again to the outrage of all. By the way, the snake in the photo is George’s pet boa constrictor Bal.”

If George & Ben’s Boa Constrictor & A Natural Vine should ever be reissued, it won’t be from the original master tapes.

“When I worked at Vanguard between 1974 and 1976, I looked for the Boa Constrictor masters. I was told they had been destroyed.” Side B
6. Time is Money
7. Alligator Man
8. Sundown Stick
9. Don’t Try To Hide from the Lightning
10. Build Your Wall

Note: “Alligator Man” is a cover version of a song by Floyd Chance and Jimmy C. Newman, first recorded by the latter. It was later covered by Alex Chilton on his LP Like Flies on Sherbet.

“This is the monster rare, impossible to find UK original pressing with laminated cover from 1968 on Vanguard Apostolic, Catalogue No. SVRL 19042.

This little known gem was the only record that this psych-folk duo ever recorded  for Vanguard Apostolic.  It has all the elements one looks for in that genre and few others as well. There are some really deranged, acid-drenched compositions like Devil & the Ace of Spades (with its backward tape loops, mournful sax, and downer guitar strumming) as well as dissonant, freaky, rocking, blues numbers like Time is Money. Their music, while it owes something to other folk-experimentalists from the late 60s is also inspired by classic, country blues and at times they come off as a sort of hippie ancestor of garage-blues-rock duos like the Bassholes or Black Keys.” “HEY Folks this is old George of “George&Ben” I’m still playing,…Now with my 20 year old Son IVAN FIGGS, who by the way does a beautiful “cover” of “DEVIL &the ACE of SPADES” you can hear it on REVERB NATION. It’s also on my Face Bk page. Ivan’s album is called “THE SHORES OF ACHERON“.

If YOU WANT SOME MORE OF MY SONGS I’ll record some of them and share them free.”

You can also listen to Ivan Figgs’ version of “The Devil & the Ace of Spades” at Bandcamp.com.

Lyrics to “The Devil & the Ace of Spades”:

Well the Ace of Spades he just fell right down
Lay there on his back
I stretched out my hand to help him up
He just said, “Get back”

Ben Syfu also appeared on the long-lost 1968 Vanguard Apostolic two-disc LP The Family of Apostolic, on which he is credited with “water, coughing, sniffling, yawning.” “The Family” of Apostolic was basically musician-astrologer-sound engineer John Townley’s family and friends and their music has been likened to the closest thing to an American Incredible String Band. Townley founded Apostolic Studios (where Jon Bon Jovi’s cousin Tony Bongiovi worked as an engineer) in 1967. Before that, he was a guitarist in The Magicians (1965-1967), whose song “An Invitation to Cry” is featured on the garage rock compilation Nuggets: Original Artyfacts from the First Psychedelic Era, 1965–1968. Ex-Magicians Garry Bonner, Alan Gordon (who together wrote several of the Turtles’ hits, such as “Happy Together” and “She’d Rather Be with Me”) and Alan Jacobs also perform on The Family of Apostolic. Townley currently maintains an astrology web site called AstroCocktail. Young Aida Tutturo (right) was one of the children photographed on the back of “The Family of Apostolic.” She would later gain acclaim as Janice on HBO’s “The Sopranos.”

One of the photos on the back of The Family of Apostolic featured a young Aida Turturro, John Turturro’s cousin, who went on to portray Tony’s sister Janice on HBO’s award-winning TV series The Sopranos. The cover girl is John and (first wife) Gilma Townley’s daughter Deidre.