Artscape at the BMA
Following the Thursday night preview of Laure Drogoul’s sideshow-vibed Ceci n’est pas a Booth, Kiosk or Gazebo and Other Radical Shacks, I took in Artscape proper on Saturday. First stop was the Baltimore Museum of Art so I could see “Artscape at the BMA,” an exhibit honoring the seven finalists for the 2007 Julie and Walter Sondheim Prize, which is organzied by the Baltimore Office of Promotion & The Arts. The winner of this year’s $25,000 prize was Baltimore native and well-liked Maryland Institute College of Art instructor Tony Shore, whose specialty is black velvet paintings. The other finalists included sculptor Richard Cleaver, photographer Frank Hallam Day, filmmaker Eric Dyer, Geoff Grace, Baby Martinez, and filmmaker-artist Karen Yasinsky.

I was really wowed by Richard Cleaver’s incredibly detailed ceramic and wood sculptures that were embellished with all sorts of eye dazzling minutia, from fresh water pearls and garnets to Swarovski crystals and gold; there were a lot of pieces and any of them could easily have taken the top prize IMHO. 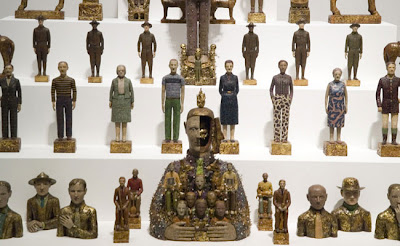 But I have a soft spot for filmmakers, so of course I loved the entries there by local filmmakers/film instructors Eric Dyer (Visual Arts & Animation, UMBC) and Karen Yasinsky (Film/Media Studies, Johns Hopkins University), who is married to filmmaker and Charles Theatre co-owner John Standiford.

Eric Dyer was also a finalist last year and once again he had an amazing “cinetrope” projection entry, Marching Bellows. Cinetropes is the term Eric coined to describe the zoetrope-like sculptures that he puts into motion, films with a high-speed shutter camera, and projects onto a wall. His Marching Bellows zoetrope was modeled by John Rouse and Eric Smallwood. Alas, it was only one piece, and I think that factored into the judges scoring. Still, Eric made the finals two years running and that’s quite an accomplishment in itself. 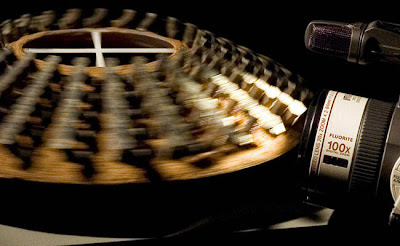 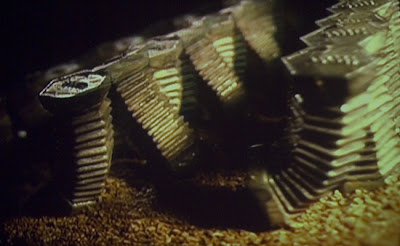 and projects these marching bellows.

I had never seen Karen Yasinsky’s work, but I knew she was well-respected in her field, having already exhibited internationally for years and winning numerous honors, including a Guggenheim Foundation Grant in 2002. I was pleasantly surprised to see her 6-minute stop-motion film La Nuit and the 15 drawings comprising her Curious She Stands Alone work. 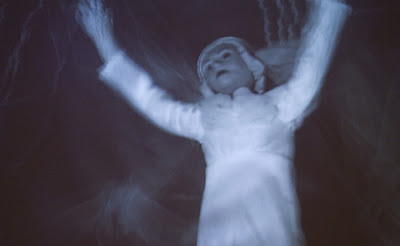 I’d be remiss not to mention Tony Shore’s black velvet paintings of his peeps, depicting ordinary Baltimoreans doing ordinary things but made to look like epic murals by Olde Masters thanks to the lighting and color and the larger-than-life size of the canvas. My girlfriend Amy liked this one the best, because she said the guy in it had “Reverse Plumber’s Crack” action going on with his pantaloons: 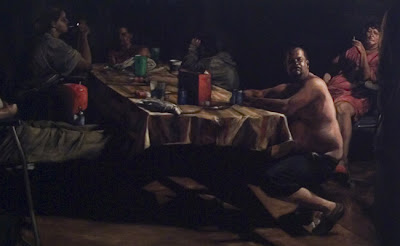 Tony Shore’s BOOPER’S TABLE lets it all hang out.

Having seen all the finalist exhibits, we headed out of the BMA, but it’s hard to do that without stopping by the gift shop (my second favorite, after the American Visionary Art Museum). There I picked up a postcard of erstwhile Fluxus experimental filmmaker Nam June Paik. (Related Link: Artsy’s Nam June Paik page) One of my friends from the library, Wonsook Baik, said she might be related to him (the Korean alphabet is apparently pretty flexible on its P’s and B’s), which makes sense since she is also an artist (MICA MFA 2004) and it must be in her genetic code. Anyway, I had never seen a photo of him, so thanks to the BMA’s commercial outlet, I now have.

That said, we hopped in my car to head down into the belly of the beast, the traffic jam vortex that is Artscape proper. How fitting that our first stop would be the bumper-to-bumper Art Cars exhibit on Mount Royal Avenue.