Amy and I parked on Eutaw and Franklin Street and walked up Howard Street on our pilgrammage to Artscape. Passing Laure Drogoul‘s place, we peered in the front window and lo and behold, there was “The Root” (pictured at left), her huge devil head sculpture that was awarded the first Julie and Walter Sondheim Prize in 2006. (Laure wisely creates works that can be easily deconstructed to fit through doorways; this one broke down into 17 separate parts, like Tracey Ullman’s broken heart.) A colossal head the size of a small SUV is not your normal living room decoration, but then artists are not normal people.

As we crossed Read Street, we decided to stop and check out what was there. Neither of us had been on Read Street since the glory days of The Leather Underground (the bet place to buy cards – I fondly recall getting my Abe Sherman “Holiday Schmoliday” and “Seasons Beatings” Christmas cards there back in the early ’80s), the original Atomic Books, Modern Music, and the Read Street Festival back in the ’90s. My sister used to get her hair cut at the legendary Hair Garage here, before that biz went under in a big drug scandal (the place allegedly gave new meaning to the term “blow dry”).

But even before we used to hang out there, Read Street was a happening counterculture spot. According to the Maryland Historical Society, it was “Ground Zero for the state’s counterculture in the late 1960s,” with businesses like the Psychedelic Propellor, Omar’s Tent Factory and the Clothes Horse catering to hippies “with incense, paisley, and water pipes.” Check out this Audrey Bodine photo of “the scene” from the Maryland Historical Society’s Special Collections Department: 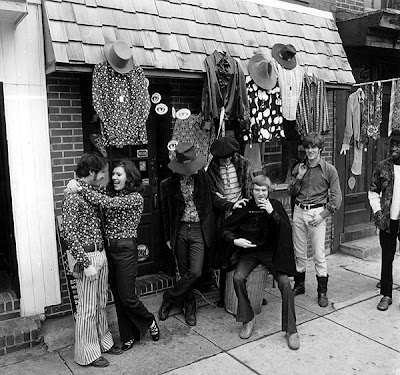 We first passed Pete Babones’ Beatnik Barbership (where Modern Music used to be), then spotted Read Street Books and Coffee. “I think this was where Atomic Books used to be,” I told Amy. We went in and the woman behind the counter of this bookstore/cafe, Lisette, verified that it was ye olde Atomic. Read Street Books sells new and used books, vintage paperbacks, lesbian fiction, espresso, herbal teas, Italian sodas and desserts. I was impressed by the layout and the inventory, all esoteric arts books and leftist-leaning liberal media magazines (the kind I like). I even found an out-of-print British film history book, that I put aside to pick up on our way back from Artscape.

We did stop back after the festival, and there was quite a surprise awaiting us – one that made me realize why Atomic and Modern Music had moved out of this neighborhood. They’d been robbed. And they had it all on the closed circuit TV, so Amy and I got to watch the robbery in real-time, like a muted episode of COPS. Lisette said the Video Store owner on the corner had been robbed two nights previous by the same man. Apparently there’s some rehab halfway house around the corner that acts as a staging area for these once-and-future criminals. Ah, junkies and crime – it’s so Baltimore!

But I digress. A few blocks later we hit the Art Cars exhibit across from the Meyerhoff. But first, looking down, we had an Asphalt Elvis sighting. 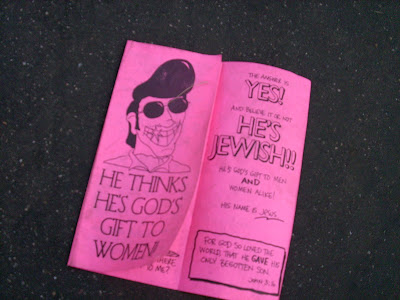 The first car we spied was this treehouse pickup that had a bird’s nest in the back. You can see Amy eyeing the eggs in the basket (I had to convince her that they were non-edible “art” eggs!). This car would have been considered the equivalent of a Hummer in Fred Flinstone’s day. 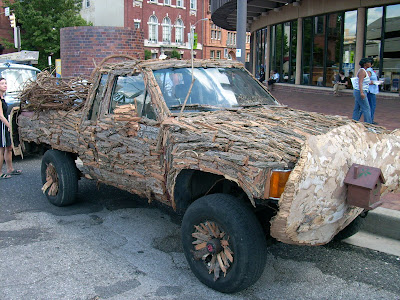 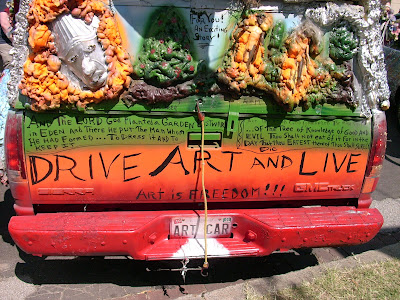 Don’t be fooled by imitations. The license plate indicates that this is THE Art Car.

This one was called the FAUX JAG even though it was clearly a Karmen Ghia. Amy liked that’s its interior was a lepoard skin bedsheet that matched mine. 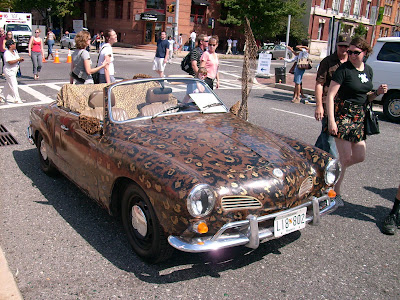 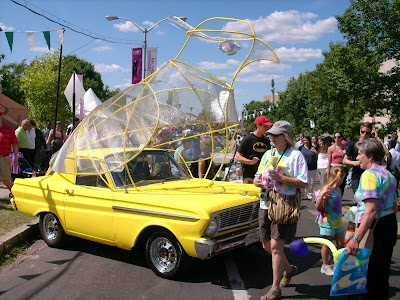 This car gives you the bird’s-eye view. 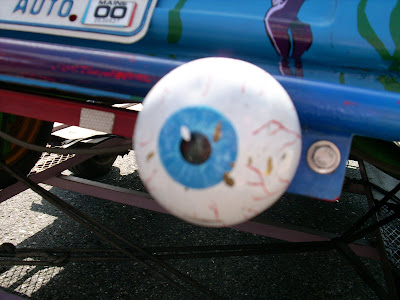 This one just gives you the Eye! 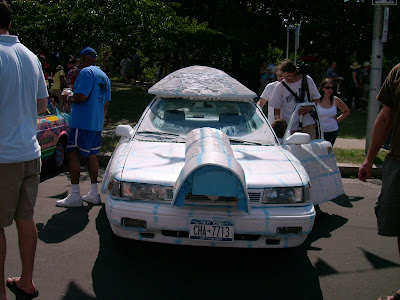 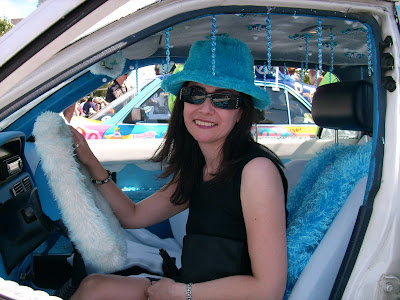 Cool Girlfriend Amy Cools Off in the Igloo Car 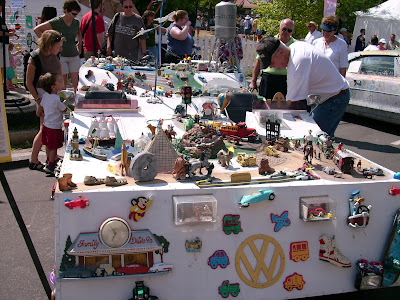 “Understatement” is clearly the aesthetic of this art car. 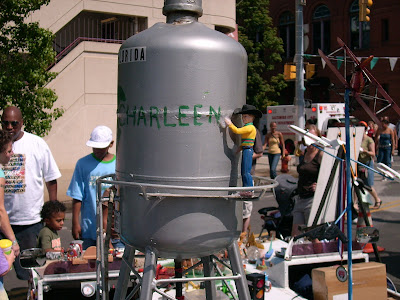 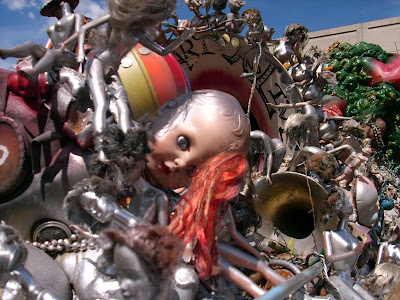 A car only the Quay Brothers could love. 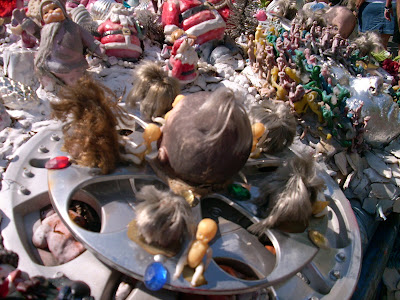 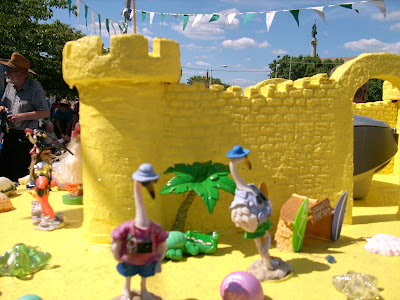 Detail from roof of an art car. 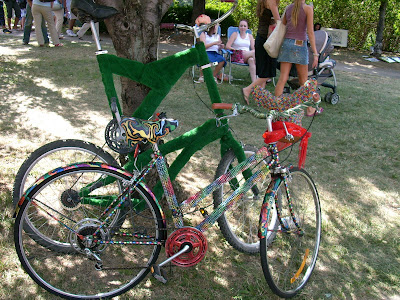 Art Bikes: These two bipeds were parked behind an art car. 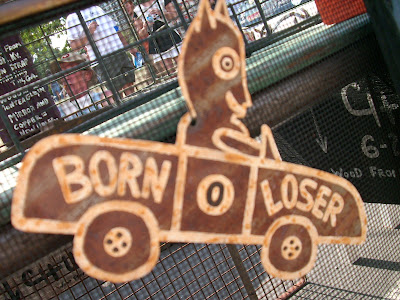 Art Cars: You are what you drive.