Will somebody please post the original Mr. Ray voiceover ads!

Anyway, it got me to thinking about some local ads that have achieved iconic status. At their best, they function as kitsch-laden ephemeral artifacts of modern folk art. At their worst, they’re just more crap on the boob tube, where it’s increasingly hard separating the chaff from the chaff.

And the other martial arts sensai, JHOON RHEE’s “Nobody Bodders Me” ad featuring the Nils Lofgren jingle…

Then there’s the fake car ad “Fuck You Baltimore”:

And speaking of getting fucked with, who can forget car salesman supreme Scott Donahoo?

Baltimore Ravens megalithic lineman Jonathan Ogden did a number of recent ads with the “Go, Go, Go GEBCO Girls.” I wish the original GEBCO Girl ads were still around, but what are you gonna do? The new jingle features local blues singer Kelly Bell and guitarist Dave Vergauwen.

Ogden’s teammate Ray Lewis did his pitching as “Inspector 52” for Eastern Motors:

Ogden and Lewis are pale imitations of Baltimore’s greatest jock pitchman, Bubba Smith, who hobbled around Memorial Stadium while phonetically reciting his cue cards for the Saiontz & Kirk law firm.

Eastern’s pitching towards its urban demographic base also led it to air commercials with the charisma-free rapper Fat Joe.

Another local celebrity was Stephen L. (the L stood for “Let’s Talk About It”) Miles.

Of course, Stephen L. Miles was a scion of the Luskins family…who among us can forget Jack Luskin, “The Cheapest Guy in Town.” Here’s national celeb Jim Varney (aka Ernest P. Worrell) doing his “Hey Vern, know-what-I-mean?” pitch for Luskins:

And from the Atomic TV archives come these classic animated commercials touting Baltimore’s favorite cheap beverage! Keep an eye out for the “Natty Fro” commercial at the end.

My fave Natty Boh ad is the one that’s been on my answering machine for the past twenty years, the “I’m home relaxing…” classic:

And on a related old time Baltimore TV note, here’s a look back at Baltimore kiddie show hosts produced by Tom D’Antoni in 1986 for EVENING MAGAZINE:

BALTIMORE TV KIDS SHOWS HOSTS FROM THE PAST

Tom D’Antoni also did a great story on Baltimore businessmen who made their own commercials. Included are Mr. Nobody, Jerry of Jerry’s Chevrolet/Toyota, Rich Coulson of Bill Kidd’s Toyota, Stephen L. Miles, and Alan Elkin for Advanced Business Systems.

THEY DO THEIR OWN COMMERCIALS, PART 2

And speaking of Tom D’Antoni EVENING MAGAZINE stories, here’s a piece on Wild Bill Hagy (who passed away last year):

And finally, the City Paper called Senate Auto Insurance’s “Kiss My Bumper” commercials Baltimore’s Best of 2006 (Senate Insurance is based in Laurel, MD, but the ads air in both the DC and Baltimore metropolitan areas). 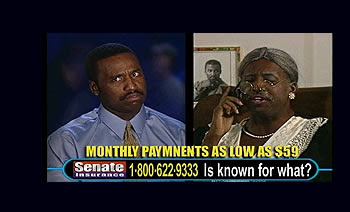 Starring comedian Howard G (BET’s Comic View, HBO’s The Wire), I think they’re incredibly derivative and unimaginative – stealing freely from the played-out concept of black men dressing up in drag as big fat mommas (see Tyler Perry and any recent Eddie Murphy or Martin Lawrence movie) – but I guess that tauting slogan has its bad boy appeal. And they do revive the great Low-Budget Urban Aesthethic of the Mr. Ray commercials. For a complete list of TV commercials, see the Senate Insurance website.