Lest we forget, legendary Baltimore musician Mark Linthicum – better known to friends and local music lovers as Mark Harp or “Harpo” (for his resemblance to the similarly curly-haired Harpo Marx) – passed away on Christmas Eve, 2004. God rest ye merry rockin’ man – and thanks for the music, mirth and memories. Atomic TV: Mark Harp – Music Minus One from Atomic TV on Vimeo.

It can be difficult to put your finger on who, exactly, Mark Harp was. That’s because, in some respects, he was many people. He was, as his web site www.markharp.com describes in the fine print on the front page, a “guitarist – web geek – theater sound designer – sampler musician – songwriter and composer – nutbar – website and graphic designer – bass guitarist – producer – director – arranger – bon vivant – unemployable dirt eater – Clark Bar enthusiast – ex-IMAX projectionist – actor – retired paperboy – SubGenius Pope – AND The King Of Peru.”

He was also Corky Neidermayer, bowler and musician who wrote the underground bowling hit “Bowling With You.” He was a member of too many local bands to name here, but the list includes the Motor Morons, Chelsea Graveyard, Glasphalt, Kunigunda, and 700 Lb. Boyfriend. He was a card-carrying pope in the Church of the Subgenius. He was the guy who put Hampden’s Miracle on 34th Street Christmas display. on the web

“He was a freak,” longtime friend Brandon Welch says. “But when I say ‘a freak,’ I mean it in a positive way. He was a smart, talented man with a strange sense of humor who enjoyed making people laugh and entertaining himself.”

I can’t say I knew Mark Harp that well. For a brief time though, from September 1981 to December 1982, I’d push up close to the bandstand at venues like Girard’s and Coast to Coast and dance until my calves ached to the music of Null Set—Mark on guitar, Billy on vocals, John on bass, and Louis on drums. So when I heard last week that Harpo’s heart had failed him after a serious operation, all I could do was picture myself dancing with Amy, Bernie, Genie, Ira, Katie, Leigh, Lumpy, Mindy, Randy, Steevee, Tommy, and the rest of the Null Set camp followers.

According to my diary, first time I ever clapped eyes on Mark Harp was in a Battle of the Bands at the Marble Bar on Sept. 6, 1981. I’d come straight from the hospital where my father was all wired up and fighting for his life. I’d held his hand for almost an hour, until the radio at the nurses’ station played “Can’t live if living is without you.” Then I joined a teeny-weeny audience to hear the Screamers battle Null Set and St. Vitus’ Dance. I told my diary I was probably the one person who voted for Null Set who wasn’t dating a member of the band.

Some of you may have heard that Mark Harp, friend, resident of Hampden’s Miracle on 34th St., vertible music factory, and Baltimore fixture, was seriously ill. We did not post anything about it in the Shank due to the serious condition he was in. He was in no position to receive visitors, and we didn’t want to do anything that would contribute to chaos while Mark was trying to recover. This week we had intended to post an address where friends could send cards.

The following is a message posted to ArtMobile.
Mark passed away last night. His heart stopped in the middle of the night and they were unable to start it again. I had just seen him hours earlier and he was happy. He had regained the ability to talk. He was telling jokes to me and his friend Brandon and my wife and the nurses. We were making plans to talk to him again “tomorrow” when he would have more time to talk. Well for Mark there was no “tomorrow”. He was so glad that so many people were concerned about him. He will be sorely missed. Details to follow when I know more. -Dave Z.

The lights on Hampden’s Christmas St. will not shine as bright.

I love Mark Harp. Along with Mark O’Connor, Randy Peck and the boys in Berserk, he is one of the few local musical geniuses I’ve met in my life. By pure serendipity I happen to be dating his ex-wife and by pure happenstance she just happened to come across this old CD by him while we were shopping at Normals Books & Records. 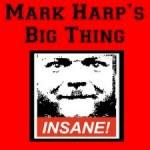 It comes from Mark’s casio cowboy days as a heavy, heavy sampler of sound bites. Some of these Amy recognized, most she didn’t, coming as they did after she and “Harpo” split up in the mid-’90s. I recognized a kindred spirit for, just like me with Atomic TV, Mark loved finding obscure sound bites and looping them ad infinitum. Marshall McLuhan would be proud.

Who would get rid of this CD? Their loss. As it is the world’s loss since Mark Harp passed away Christmas Eve of 2004. But fear not, the whole album is available for download from Mark Harp’s website (www.markharp.com). Click to download: Insane!

Anyway, herein is a track by track review of this mostly all-found-sounds record (with additional real human voices courtesy of bassist Dave Zidik, Mike Dejong and even Mark himself intoning “Grey Peach Cobbler” in the song of that name).