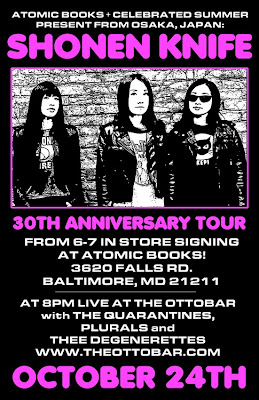 Believe it or not, Shonen Knife had never visited or played in Baltimore in the course of their 30-year career. Like most big name J-pop bands touring the U.S.(Pizzicato Five, Puffy, even Kahimi Karie), they made the obligatory stop in the nation’s capital, typically at the 9:30 Club, before bypassing Charm City to traipse up the East Coast to Philadelphia, New York, and other major ports of call. In fact, the last time I saw them was back in 1997, when they performed at the 9:30 Club in support of their album Brand New Knife (Baltimore’s powerpop trio Splitsville opened for them).

That all changed October 24, 2011 when founding guitarist Naoko Yamano and the “new” Shonen Knife girls – drummer Emi Morimoto (2010-present) and bassist Ritsuko Taneda (2006-present) – visited Atomic Books in Hampden to sell their new all-Ramones-covers CD Osaka Ramones (Good Charamel Records, 2011), sign memorabilia, and hang out with fans, before jumping in their tour bus to motor down the street and rock out later that night at the Ottobar as part of their 30th Anniversary North American Tour. And so, “Baltimore, the city that reads” officially became “Baltimore, the city that bleeds” – for Shonen Knife!

Shonen at Atomic: a rendezvous with history?

As an added bonus, Naoko’s sis Atsuko (Shonen Knife’s original drummer) was also on hand to roadie for the band; though Atsuko left the band in 2006 when she got married and then moved to Los Angeles, she filled in during band’s 2007 tour and, being Naoko’s sister, continues to be involved with the musical family she created with Naoko and Michie Nakatani in Osako back in 1981. (Original bass player Michie Nakatani left the band in 1999, with Atsuko moving from behind the drumkit to replace her on bass guitar.) 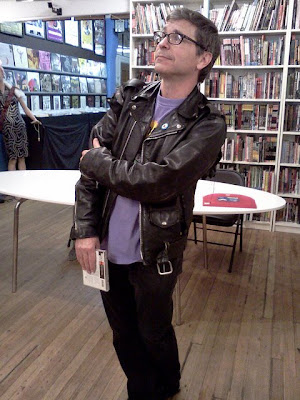 Dave Cawley, Ichiban: “The early bird catches the worm,” Dave smirks as he informs latecomers that the line forms BEHIND him. “Watch me and learn, minions – and please, DO envy me!” 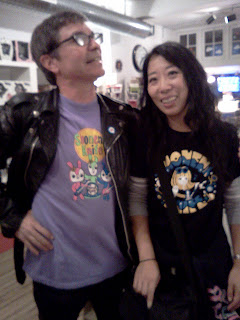 Dave Cawley was the very first fan to arrive at Atomic Books (all the better to genuflect before his idols), which is somewhat fitting, as Dave used to correspond with Atsuko Yamano dating back when he was in Baltimore’s pop-punk band Berserk. (Dave poses with Atsuko Yamano in pic at right.) Amy and I were the second to arrive and Atomic Books owners Benn Ray and Rachel Whang were greatly amused to see that Dave and I were both wearing the same 1997 Shonen Knife Tour shirts, the ones we got when last we saw the band at the 9:30 Club and interviewed them for Atomic TV (as seen on ATV’s “Turning Japanese, Part 1” – check ’em out at the 54-minute mark of this episode). Rachel Whang captured the “Misfits-in-Matching-Outfits” photo op, below: 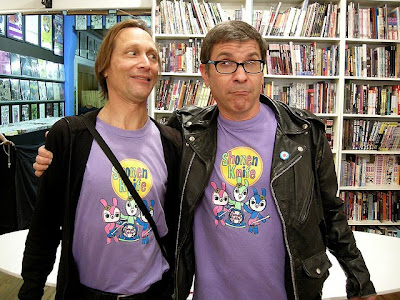 Dave and I loved Shonen Knife from the moment we discovered them – he first, of course, via his Pan-Asian Pop Cultural Studies (an ongoing obsession), me rather late in game thanks to Sassy magazine’s championing of “Twist Barbie.” We both agreed that they were the nicest band we’d ever met, and regretted that we hadn’t seen or listened to Shonen Knife in a long time; in fact, 1998’s Happy Hour album (my personal favorite and the last to feature original bass player Michie Nakatani) was the last CD either one of us had purchased. We decided it was time to make amends for that criminal oversight, and we looked forward to meeting the new “Brand New Knife.” We learned that the first cut may be the deepest, but the new Knife cuts a pretty sharp figure as well! 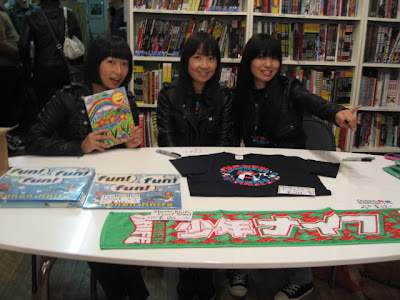 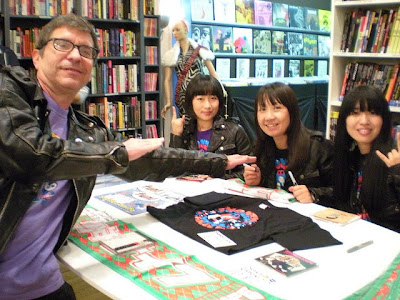 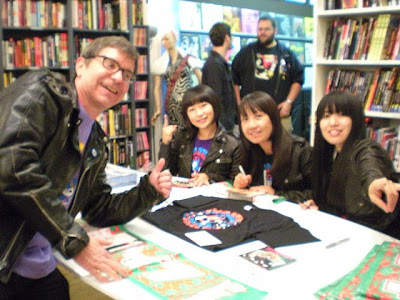 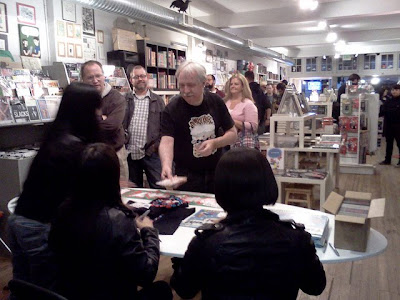 The fans behind Dave “I was first!” Cawley wait their turn at Atomic Books 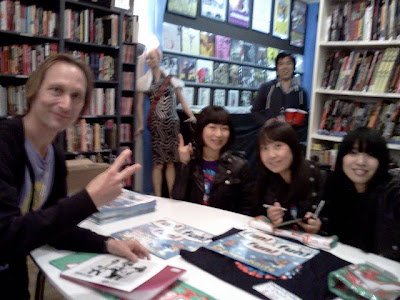 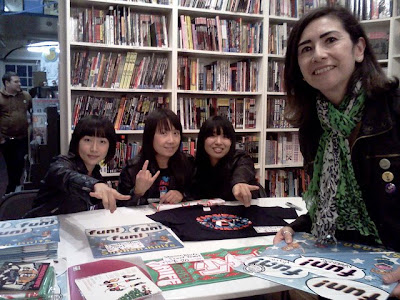 Amy had never heard Shonen Knife, but bought their “Fun! Fun! Fun!” LP as an introduction to the fun, fun, fun 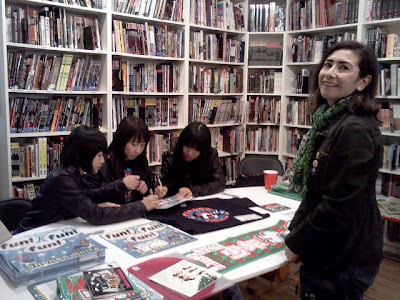 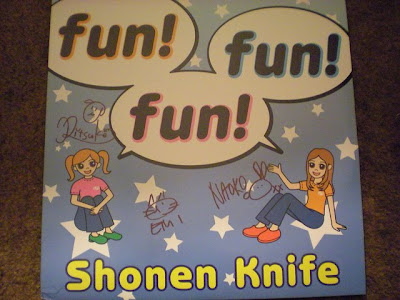 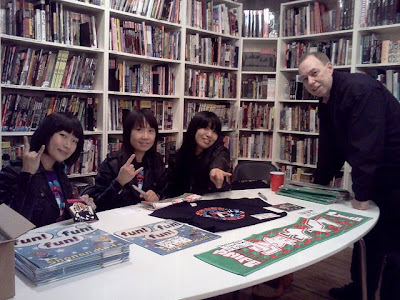 Our Facebook pal Gary Razorpop poses with The Knife

Shonen Knife really seemed to enjoy looking through the shelves at Atomic Books – where Naoko’s book Shonen Knife Land was also available for purchase; they also explored the vinyls bins at Celebrated Summer Records next door (who splurged for donuts and other edibles). 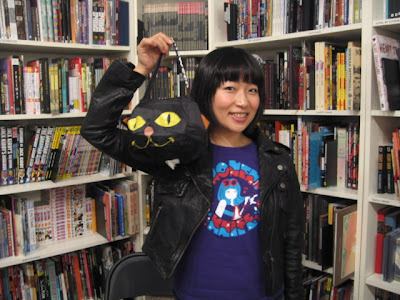 Emi lets the cat out of the bag at Atomic Books 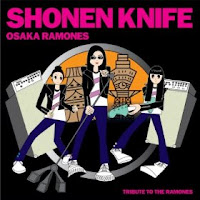 Just as fitting as Dave Cawley being first in line at Atomic Books was Shonen Knife’s decision to release an all-Ramones song album, for Shonen Knife is basically an all-girl Japanese version of the Ramones. Both work from a foundation of simplistic punk rock buzzsaw guitar and lyrics celebrating everything that’s good dumb fun in life – whether it be sniffing glue, getting kicks and scoring chicks for the Ramones or eating all that food (“Cookie Day,” “Banana Chips,” “Hot Chocolate,” “Brown Mushrooms,” “Froot Loop Dreams,” “Ice Cream City,” “Gyoza”) that Naoko sings about in countless Knife songs. Osaka Ramones contains all the classic Ramones songs you’d expect to hear championed (“Blitzkrieg Bop,” “Rock ‘n’ Roll High School,” “Sheena Is a Punk Rocker”) as well as an inspired surprise cover of “Scattergun,” a rockin’ tune written by Dee Dee’s replacement C.J. Ramone (Christopher Ward) and taken from their last studio album ¡Adios Amigos! (1995). And it’s not just Naoko handling all the vocal duties: Ritsuko lends her voice to “Sheena,” while Emi gets to sing “The KKK Took My Baby Away.” The album was recorded in Osaka and Buffalo, NY, with Goo Goo dolls bassist Robby Takac producing five tracks at his GCR studio in Buffalo and mixing the final album. (Attention collectors: The US album features a Road To Ruin-style drawing by Miyoka Hayakawa, while the Japanese release features a black-and-white photo of the band that mimics the first Ramones album.)

Watch Emi sing “The KKK Took My Baby Away.”

I enjoyed meeting the new (to me) Shonen Knife rhythm section. I quickly learned that sexy long-haired bassist Ritsuko Taneda used to sing and play guitar in the J-Pop bands Keihan Girl and Denki Candy (where her nom de stage was “Marilyn”). And I discovered that super-kawaii drummer Emi Morimoto (whose Louis Brooks-style haircut reminded me of Scott Pilgrim’s girlfriend “Knifes Chau” from Scott Pilgrim Vs. the World), used to bang the skins for Ni Hao!, Ultra Jr, mamastudio, and NASCA CAR.

But I really enjoyed chatting briefly with Atsuko Yamano, Naoka’s sister who helped set up the merchandise table and assisted with other tour details as needed. 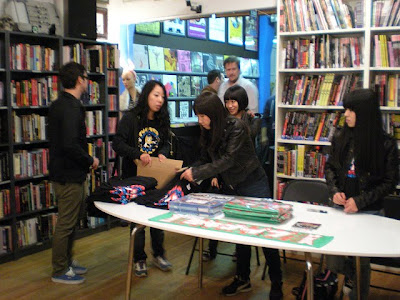 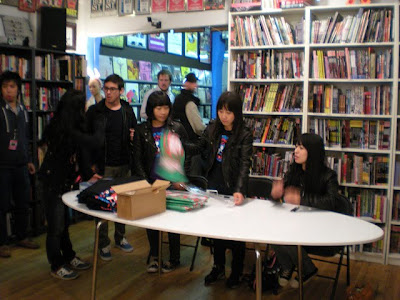 Atsuko now resides in Los Angeles, where she has plenty of time (and sunny weather) to indulge in her latest passion of tennis. Both of us are Federer fans, and I told her I was equally impressed with Kei Nishikori who, at age 21, is currently the highest-ever ranked Japanese player (#30) on the ATP Tour. Alas, like Kei, Atsuko also favors a two-handed backhand, though I tried to convince her of the benefits of the one-handed slice. (Maybe next tour?) 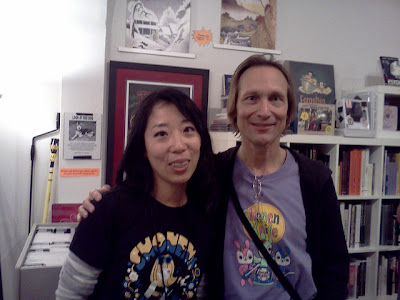 I can’t say enough about how sweet and friendly these gals are. They even indulged me when I went back for yet more merchandise for them to sign – and they signed everything, for everybody. Benn Ray joked that I had forgotten to get my ’97 tour shirt signed, but I’m too much of an anal-neatnik (as far as fashion, at least, if not housekeeping!) to go that far. 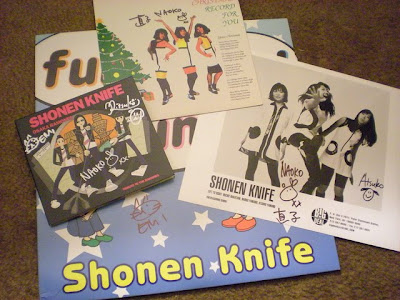 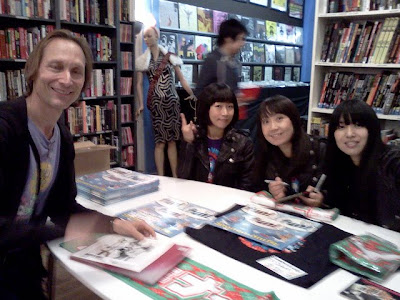 “OK Mr. Warner, last one – our hands are cramping now!”

Alas, Amy and I did not join Dave Cawley later that night at the Ottobar show, as the prospect of having to wait through three opening bands on a Monday night (doesn’t anybody in this town work?) didn’t gibe either with our schedules or our aging bones. (Yes, we’re old!) I’m sure somebody will post some video of the Ottobar show shortly, but in the meantime, here’s what the girls looked like live when they brought the “Blitzkrieg Bop” to London’s Windmill club back in August:

And here they are rocking the Asia Society in NYC with non-Ramones ditties back in September 2010:

Shonen Knife’s first-ever trip to Charm City, coming less than a week before Halloween, was definitely a treat for all Baltimorons! 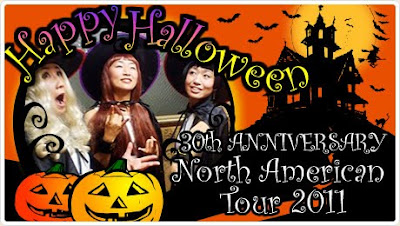 Postscript (10-26-2011):
As anticipated, videos of Shonen Knife’s show at the Ottobar turned up a day later. Herein is what went down as recorded by serenab4 and motionrotarytoad.