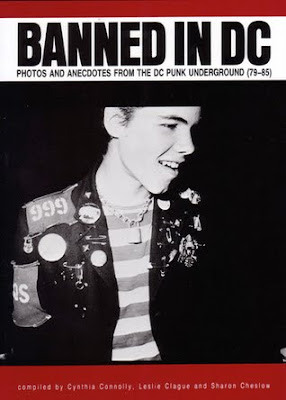 I came across this review of the book BANNED IN DC (long out-of-print, with used copies ranging from $86-$480!) after Googling “Da Moronics” to see if they had released any of their music on the Internet. Typical of the author’s style, it was less a book review than a remembrance of the narrator’s own personal experiences in Baltimore during its brief punk era – which is why I like it! (Well, that and the fact that I remember later kissing one of the girls whose photo appears in the book.) I was part of this fleeting punk scene, possibly my only (tentative) connection with the author.

Full Disclosure: I never “got” the artist who went by the impossible-to-spell and constantly changing handle “tENTATIVELY, a cONVENIENCE” (not to mention “Monty Cantsin,” “BalTimOre,” etc.) or however he spelled it. (Most people just referred to him as “Tent” or even by his birthname, Michael Tolson. It was a blissfully short and simple way to refer to a guy who was anything but blissfully simple – though he was kinda short.) But then I never really knew him, though he was always exceedingly polite (and quiet) on the few occasions I did meet him and I knew people who knew him (my physical therapist and former N.E.M.B. bass player George Poscover once lived with him, as did my friend Melissy D’s former boyfriend “Big Dave” Scheper; and Kenny Vieth of Henningers Tavern knew Tent from his Jockee Clubbe residence days, etc., etc.).

In fact, my filmmaker friend Skizz Cyzyk – who took over Tent’s H.O.M.E. Viewing film series at The Mansion and turned it into (eventually) Baltimore’s MicroCineFest film festival – swears he’s a genius and considers him one of his all-time heroes (see Skizz’s interview with t,ac on the occasion of screening t,ac’s STORY OF A FRUCTIFEROUS SOCIETY at the 2005 MicroCineFest). Another filmmaker, Kent Bye, once started working on a documentary about him (tentatively entitled “Who is tENTATIVELY, a cONVENIENCE?”), which has yet to see the light of day. I think Kent had the right idea and I really wish someone would not only make but finish a documentary about him because, like him or not, “get” him or not, Tent has led an amazing life. He seemed to know everybody – from John Doe to Vermin Supreme and everyone in between – and while I didn’t always “get” his art, I can’t fault his work ethic (Tent: “Work will make you Free Trade!”). This is a guy who made the commitment early on to be a full-fledged anarcho-artist 24/7 and he’s never wavered from it since. In a different era, he might have been one of the nihilists Dostoyevsky described in The Possessed. Or burned at the stake in an auto-da-fe. As in the Sinatra song “My Way,” Tent’s had a few regrets – but he did it HIS WAY, for better or worse. 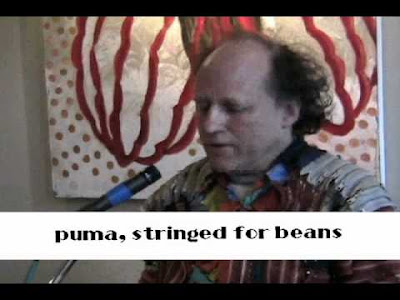 Tent - in yet another guise

He currently resides in Pittsburgh, looks a little like Ken Kesey and goes by the new handle Amir-ul Kafirs – but more importantly, he’s discovered the free-publishing utility and social networking wonder of the Internet, which is a good thing because Tent is an amazing archivist; he’s basically uploaded his entire life to the Web, a treasure trove of photos, writings, art and – more importantly – memories of people, places, and things he’s experienced. And he’s experienced a lot (Tent: “I’ve collaborated with so many people in so many ways that it’s almost ‘impossible’ to keep track of it all”!) Speaking of his hard-to-keep-track-of-ness, we have some of his films – both in 16mm (Subtitles, Sound along w/ t he bouncing ball(s), Transparent SMILE) and video (H.O.M.E. encyclopedia) format – at the Enoch Pratt Central Library, but there are more that are almost “impossible” to find, “lost in the stacks” because of his non-intuitive, non-traditional, library catalog-unfriendly way of spelling and naming things! (Tent defends this approach as a refusal “to be contextualized w/in dominant careerist paradigms.” All I know is: only rap artists are more problematic for librarians to look up – with all their monetary symbols and non-intuitive spellings – and my generation thought Slade couldn’t spell right!). But maybe he wanted it that way. Maybe he wanted to be a puzzle to be solved, a hidden Easter Egg unearthed in the stacks.

*** tENTATIVELY, a cONVENIENCE’s review of BANNED IN DC ***

[I took the liberty of adding some photos and hyperlinks to Tent’s review.]

My initial review of this was 15160 characters – 5160 over the limit. I have to cut out over a 3rd of it. Looking thru it is like looking at a high school yrbk that’s for the outcasts & rebels.

Around 1972, when we were both 19, John Duchac & I went to a concert called The End of the World Show. A group played that I sometimes credit w/ being Baltimore’s 1st punk band: The Grand Poobah Subway. The latter were completely irreverant, they used styrofoam guitar props that they destroyed. It was cacophonous & bombastic. I loved it, John hated it. I think it was too ‘amusical’ for him, too ‘tasteless’. 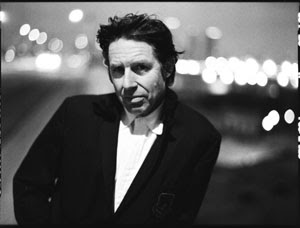 John moved to LA shortly thereafter where he became John Doe of the band X. John wd come back to Baltimore from time-to-time & by 1976 he’d turned me onto Devo’s 1st single. But it wasn’t ’til roughly 1977 that I personally felt punk as a new phenomena when I heard the Sex Pistols & when some friends in Baltimore started a band called Da Moronics. 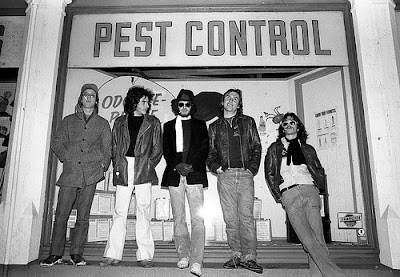 The Sex Pistols were ANARCHIST, as was I. That, in & of itself, was exciting. At the time, I only knew one other anarchist in Baltimore. But the music? Dullsville. I’d already long since left rock behind & this was basically the same old same old. But Punk Rock was saved by a few obvious things: a sortof fuck-it! attitude that encouraged DIY raw flying-by-the-seat-of-yr-pants. & Da Moronics exemplified this. For me, they were Baltimore’s 1st punk band. Tom DiVenti was the guitarist & a prominent poet/performer. He had a big carriage house space that he turned into the Apathy Project. This was a great place for shows. Tom was making things happen. Bill Moriarity was the singer. 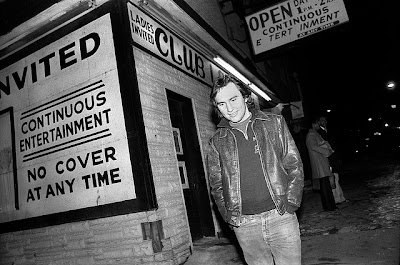 Da Moronics probably did songs about the most miserable shit, like cancer, w/ a great deal of irony & fuck-it!-that’s-the-way-it-is! frankness. They were totally ragged at 1st but, as w/ most punk bands, they didn’t let that inhibit them. They were fun. I remember one nite behind the Apathy Project a guy tried to rob a petite lesbian friend of mine in the nearby alley at gunpoint. She was in an early all-girl punk band called the 45s. She punched the wd-be robber in the face. He ran off.

Bill got sick of being in Da Moronics pretty quick b/c one of the main places they’d play was at the Oddfellows Hall in Towson (a pretty fascist suburb to the north of Baltimore) where the jockier members of the audience wd throw full pitchers of beer at him. He didn’t get it – why the fuck did they think it was ok to do that do him?!

In 1979, I created a series of events under the name Crab Feast – the 1st of wch was a guerrilla installation. On January 24, 1980, 4 of us played as a band at the Telectropheremanniversary – the 1st anniversary of an underground phone network that I’d cofounded.

Crab Feast performed songs about herpes (wch I’d recently gotten), telephones, the Krononautic Society (a time-travel society many of us were in), some experimental instrumentals of mine, etc.. Thinking back on it now, that one gig was pretty historical.