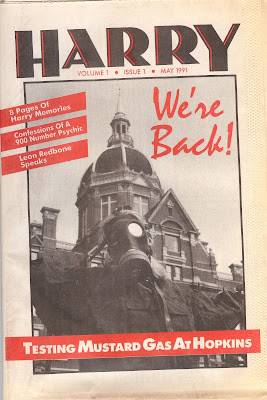 “Going through the bottomless piles of papers, magazines, and assorted rubbish/detritus in the firetrap I like to call Tom’s Toxic Townhouse, I ran across the May 1991 premiere issue of the “new” Harry. Harry was Baltimore’s “underground paper” of record from 1969-1972 that was rebooted by Tom D’Antoni in 1991, probably because he didn’t feel Baltimore’s putative alternative press (i.e., the City Paper) was up to snuff.

As he wrote in the masthead of this debut new Harry, ‘This newspaper exists because a lot of people want it to…This is the first issue. It’s a start. It’s the first attempt at realizing the ideals set on the page before this one…’