Posted on January 6, 2013 by almosthipguy

The Goof on the Roof: Bird-Brain Raven Fan As Lame As His Team
By Tom Warner (Accelerated Decrepitude, 12/29/2007) 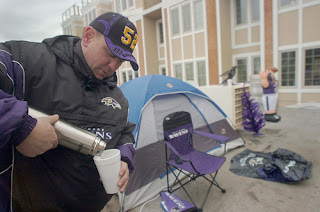 The Jig Is Up for “Rooftop Ron” Stach, who bravely took time off from skittish employment to whore himself for rooftop publicity

First my girlfriend mentioned him, then my friend Scott “Unpainted” Huffines (“Huffines Has It!”) e-mailed me about him, complaining about his lameness. The subject of all this buzz was an occassionally employed construction worker named Ron Stack (sic), who perched himself atop a Canton bar and vowed to stay there until either the Baltimore Ravens (currently on a 9-game losing streak) won a game or fired coach Brian Billick. And thus, in a dreadful football season in which there’s little positive to talk about, the so-called “Goof on the Roof” became an overnight celebrity (but has he been on Marty Bass’ show yet? That’s the true test of Ravens dedication and celebrity.)

“He was no goof,” Scott (pictured left) wrote. “It used to be you had to be on a roof for months! This dude was on the roof TWO DAYS and gets the front page of the Sun, expecting to be off the roof if we beat Miami. We lose, he gets stuck up there for like 2 weeks – He doesn’t even stick it out til the end of the season on Sunday! He left Xmas day. He deserved to be arrested for just being a lameass. In the olden days you had to earn your cred.”

Huffine’s Has It!
Scott’s complaint has merit, as the rooftop ordeal of “Ron Stack” (real name Ronald Stach) is hardly the stuff of Into the Wild “roughing it” proportions. Besides the media attention, it included such perks as a pup tent, two heaters, five meals a day and all the beer he could drink (and construction workers sure can drink!), courtesy of the not-publicity-adverse owner of the bar below, on whose roof he perched.

Stach’s sacrifice certainly pales compared to previous sports-related vigils in this town, like the bartender who in 1991 perched himself on a Dundalk rooftop for 23 days to protest a feud between then-Orioles owner Eli Jacobs and then-Gov. William Donald Schaefer over the naming of our baseball stadium. Or compared to 98 Rock DJ Bob Rivers, who stayed on the air continuously for 11 days until the Baltimore Orioles ended their American League record-setting 0-21 losing skein at the start of the 1988 season.

Unlike those sports fan diehards, Stach’s vigil wasn’t all it was Stack-ed up to be. Though Rooftop Ron claimed to be a construction worker, everyone knows construction workers don’t work in the Winter – that’s why you’ll find them drinking up a storm and sticking $5 bills in stripper’s garter belts until the Spring rolls around. And then there was the matter of his name. This dumbass changed the spelling of his name, thinking that was enough to avoid being caught as Deadbeat Dad Ron Stach, the guy with outstanding warrants related to owing over $43,000 in back child support to a Dundalk woman. I love this line in Rosen’s article: “He’s also single, so no one at home is second-guessing his shenanigans.”

Well, that Dundalk woman he had a child with, Kelly Strach, begs to differ. She got miffed from reading about the $500 in Ravens memorabilia Rooftop Ron purchased during his vigil.

Continue reading “The Goof on the Roof: Bird-Brain Raven Fan As Lame As His Team” at Tom Warner’s Accelerated Decrepitude.