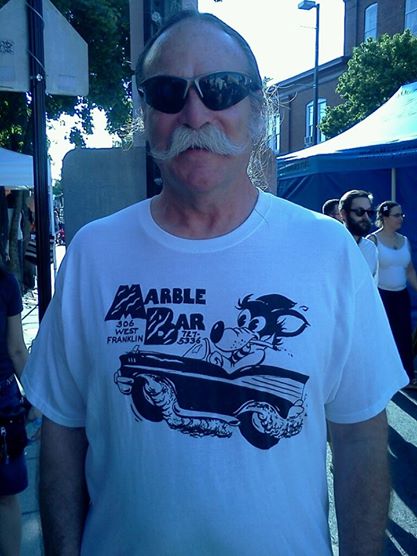 Veni, Vedi, Veditz. Harry “Chick” Veditz: he came, he saw and he conquered the local music scene by opening a legendary record store – Chick’s Legendary Records on Sulgrave Avenue in Mount Washington Village – with partner Don Webb back in the late ’70s. As Rafael Alvarez recalled in a 1992 Baltimore Sun tribute (“A swan song for Chick’s record store“), “Back in the glory days of Chick’s Legendary Records, gangs of rock ‘n’ roll bands would hound owner Harry Veditz Jr. for the chance to play for free at his annual summer thank-you party for customers. That was in 1978, during the first flowering of the punk movement in America, when the record store was on Sulgrave Avenue.” Over the years, the record store specializing in hard-to-find vinyl and local tunes would move to Smith Avenue and later Reisterstown Road, before finally closing in 1992, a victim of the rising popularity of cassettes and compact discs. “You have to move with the times,” he told the Sun. “I didn’t.” 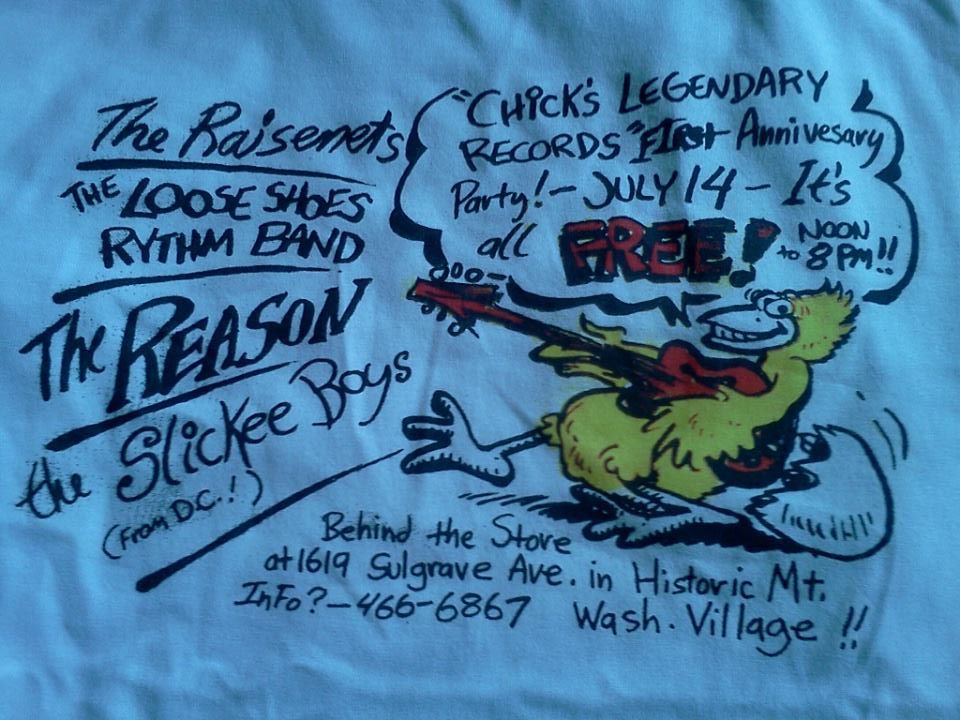 I recall those days well, having been in Thee Katatonix, one of the bands that successfully hounded “Chick” to play at his 2nd Anniversary Party in August 1980. I was later in The Boatniks, who got to play Chick’s 3rd anniversary party in 1981. Of course, the default house band at any Chick’s party was always his beloved Slickee Boys, and no one championed them more than Chick. (Alas, the Slickee Boys are now no more as well.) 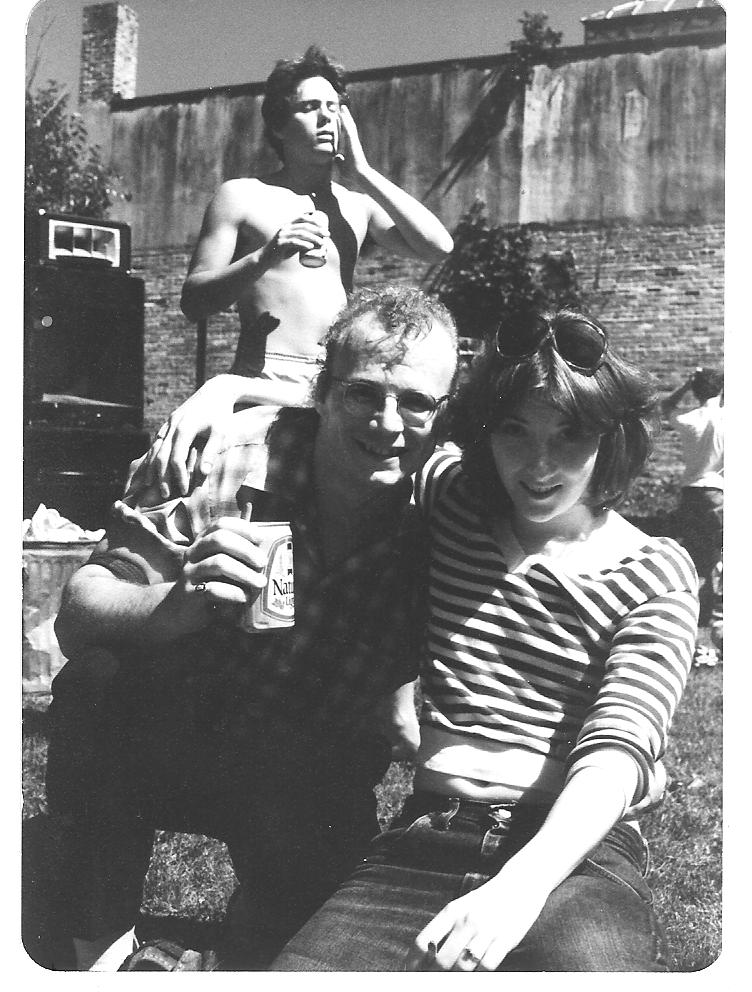 Sure, there were other good record stores around at the time –  Music Machine, Record & Tape Collector, Record & Tape Traders, Vinyl Discoveries, Record Theater (and Joe’s Record Paradise and Yesterday & Today Records in the DC suburbs) – but Chick’s was the most laid back and casual.

Besides the always affable Don Webb, Chick’s staff over the years included erstwhile City Paper music scribe Michael Yockel and various local musicians (like Rockheads/DelMarVas/Big As a House bassist Bernie Ozol), besides Chick himself (who had that steady paycheck with the City of Baltimore to keep his racks well-stocked with new vinyl). And besides having a large inventory of the psychedelic and garage rock records that inspired his fave Slickee Boys, Chick’s offered an eclectic selection of records by the local, punk, and New Wave bands then playing The Marble Bar. In fact, Chick regularly advertised in Tonescale, the Marble Bar fanzine (as shown below), 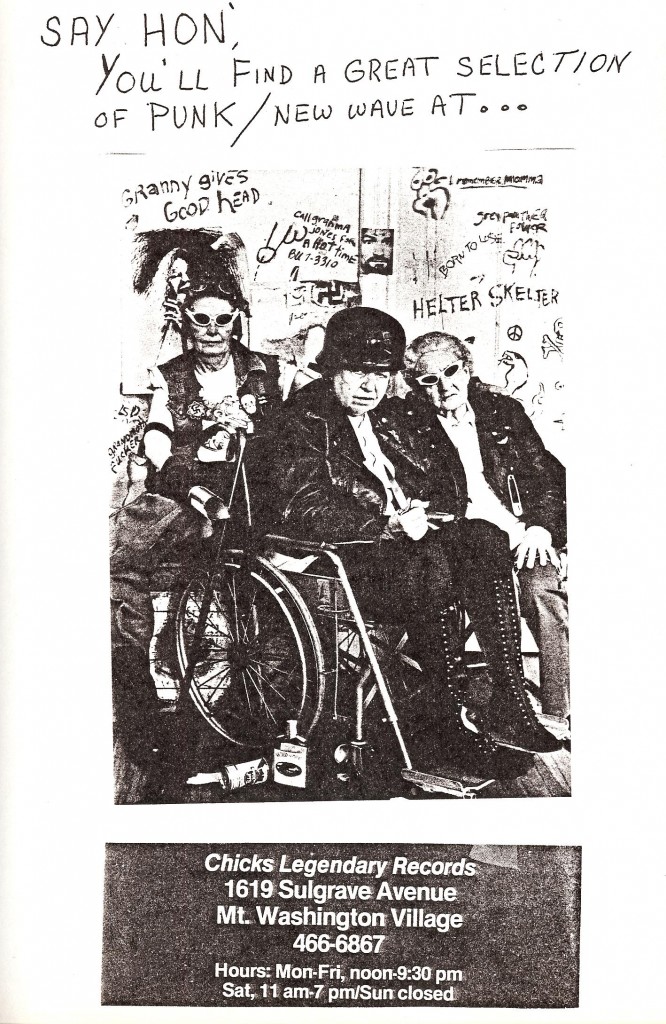 and wrote the “A Side and B Side and This and That” record review column, as well: 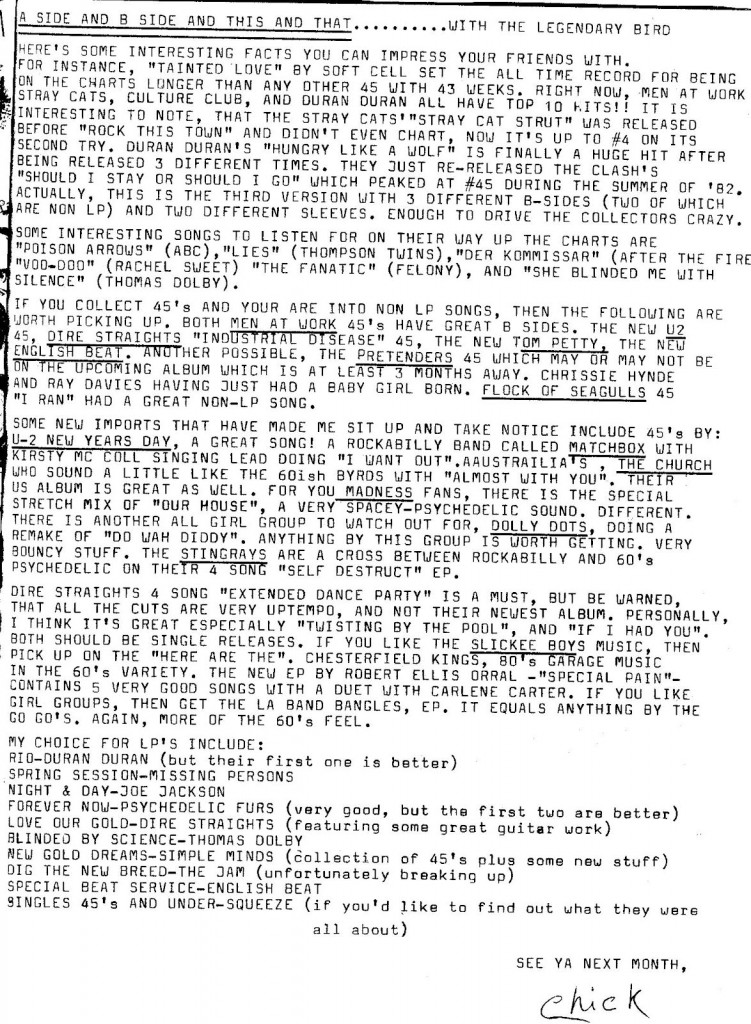 As an early champion of the local bands playing the Marble Bar, it was only fitting that Chick got his own night to DJ “the best recorded music of all time” there. In 1980, Marble Bar owners Roger and LesLee Anderson designated Thursdays as “Legendary Chick’s Nite,” with all girls (“chicks” – get it?) getting in free to enjoy 75 cent beers, as shown in the September 1980 calendar below. Chick also regularly advertised in the City Paper to promote local bands and shows, such as the OHO Record Release Party for 1984’s Rocktronics LP:

“That’s where I sold all my 10cc records,” she recalled. That was the bitter part. The sweet part was all the groovy new music she and her boyfriend of the time, guitarist Mark Harp (Null Set, Nos Mo King, et al) picked up. “Back then I was into everything New Wave and traded my Prog for Punk!” (Full disclosure: Amy has since bought back all of her 10cc collection in both vinyl and CD – proving that what goes around comes around again!) 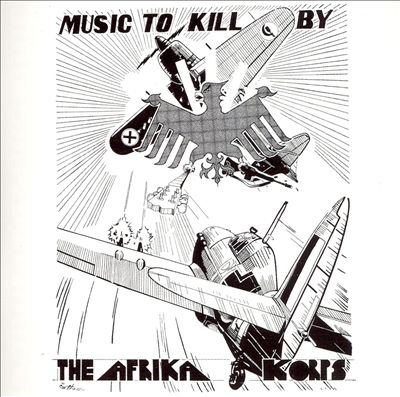 I myself remember picking up the rare Music To Kill By record by The Afrika Korps (an ensemble of D.C.-area musicians that included some Slickee Boys members), which in addition to an early version of the Slickees’ “Jailbait Janet” featured one of my fave tracks, “Fox Lane” (“Fox Lane, where all the girls get PhD’s in learning how to spread their knees”).

36 years later, Chick’s Legendary Records is long gone, but neither Chick nor his fans are forgotten. That’s why Chick is hosting a private party for his friends at The Ottobar on Sunday, August 31 to celebrate his glory days – as well as other notable milestones. As he wrote in his evite:

Among the many occurrences the party is to celebrate-the 30th anniversary of Arlene and Chick; my 31 years with the State of Mayland and pending retirement at the end of January 2015 (another party then); What would have been the 36th anniversary of Chick’s Legendary Records (I missed the 33 1/3 party opportunity); the 31 years since the Orioles won the World Series; The many summer parties at my parents place on Bodkin Creek; record store employees reunion; softball players reunion; mini Marble Bar reunion; seeing friends, relatives, and co-workers; and I have wanted to throw a party for a long time.

As we go to press, at least three bands – Chelsea Graveyard, Garage Sale, and The Stents – are scheduled to play, with possible guest appearances from the great local bands of the last 40 years. (Expect one or more Slickee Boys to post.) Video killed the radio stars and CDs killed record stores like Chick’s, so it’s rather ironic to see vinyl make a comeback as a hipster collectible these days, a collectible glorified on Record Store Day. If Chick’s Legendary Records opened in Mount Washington Village today, it might actually flourish.

And Chick still remains a committed to the purity of vinyl uber alles. As he told Rafael Alvarez back in 1992, “I’ll argue with any CD lover that albums still sound better,” he said. “And I like the packaging of albums, the art that comes with them. I know that albums scratch, skip and pop, but we have CDs that do the same thing.” 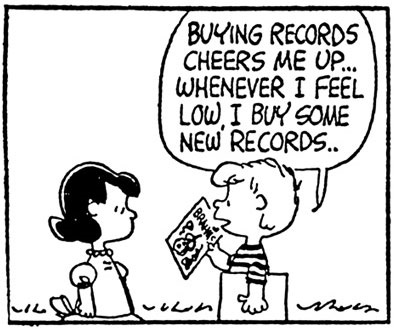 That’s why Chick still has his private collection of over 12,000 LPs and 7,000 45s,  though in recent years he’s devoted himself to his other passion – selling baseball and other collectible cards at area flea markets, yard sales, and conventions. In fact, I ran into Chick “Collector of All Things” Veditz at the 2009 Mid-Atlantic Nostalgia Convention in Hunt Valley (featuring Davy Jones of The Monkees at one of his last convention appearances) and was surprised to see him selling cards instead of vinyl. But I should have known better – Chick got into trading cards back in the ’90s when he ran Chick’s Records Tapes & Baseball Cards in Pikesville. And there he was selling vintage pop culture artifacts like Monkees bubblegum cards. “With Davy Jones here, a lot of people are buying individual cards for him to sign,” canny capitalist Chick commented at the time 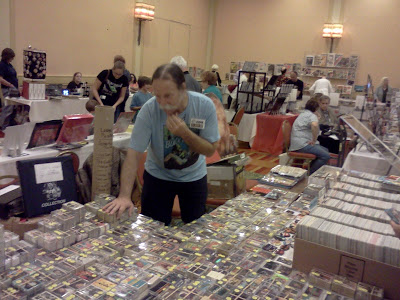 Like Judy Collins, Chick Veditz has looked at life from “Both Sides Now“- A-side and B-side! – and on Sunday night will enjoy turning back the clock and cueing up a scratchy and pop-filled remembrance of the good old days. Or as Rootboy sang, “Put a quarter in the juke, and boogie ’till you puke.” (Just don’t play any disco, or a rogue Slickee Boy might just “Put a Bullet Through the Jukebox“!)

3 Responses to The 2014 Chicks-a-palooza Party