When Animals Ruled the Malls

After hearing Mink Stole sing holiday songs at the Creative Alliance last night (Mink Stole’s Christmas: Unwrapped & Unplugged), Amy got all nostalgic for Christmases past in Dundalk and recalled that one of her most cherished holiday memories was going to see the penguins at Eastpoint Mall in the ’60s. (The Eastpoint Shopping Center opened in 1956 was wasn’t enclosed as a “mall proper” until 1972.) The discussion continued afterwards over drinks at Henninger’s Tavern, where Essex-native Scott Huffines – who’s inherited his journalist mom Jackie Nickel‘s obssession with East Baltimore history – recalled the same thing. In fact, he thinks it was mentioned in his mother’s book, Essex.

1. Penguins in the window of Hochschild Kohn
Eastpoint Shopping Mall 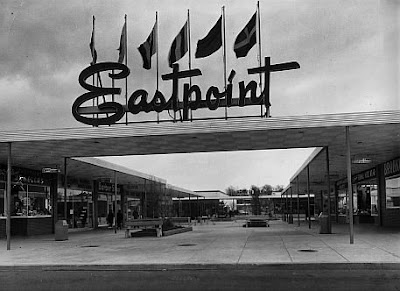 Scott says, “I can’t find a picture yet but it was a fake arctic pool with a fake penguin on top of an iceberg wearing a top hat and then live penguins in the pool.” Scott also sent me a link to Gary Helton‘s book Dundalk (Arcadia Publishing, Images of America series 2005), in which the author writes:

“…the most unique things about Eastpoint’s early days had nothing to do with shopping. Long before the National Aquarium at Baltimore was ever conceived, Hochschild’s featured a corner window display of penguins swimming about in a tank of presumably cold water. Equally entertaining was “Monkeytown,” a window full of the little primates at Hess shoes.”

“Oh, yes there were penguins at Eastpoint. And not just at Christmas, but year round. They has air conditioners keeping them cool in the warm weather. There were 2 glass walls exposed to the outside (couldn’t do that today – people would break the glass!). There was water in a sort of cement pool in the room, and the other 2 walls had a painted Artic background. There was always humidity running down the glass. Poor penguins. This was probably animal cruelty, but what did we know back then?”

Interesting, but even Scott hadn’t heard before of the barrelful of monkeys that distracted youngsters getting haircuts at Hess Monkeytown (or “Monkey Town”) – though most sources agree it was at the Edmondson Village Shopping Center… 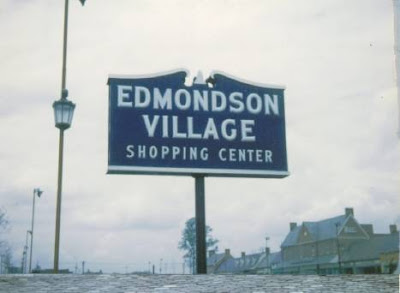 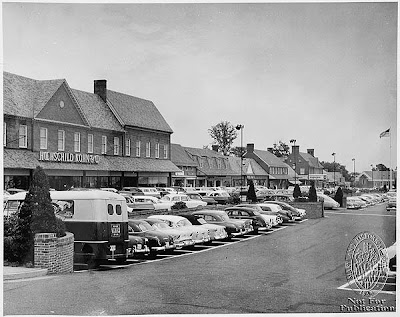 …and not – as referenced in Gary Helton’s Dundalk book and Eastpoint Mall’s Facebook page – at Eastpoint Mall. (What’s the story? Was it at both locations?) 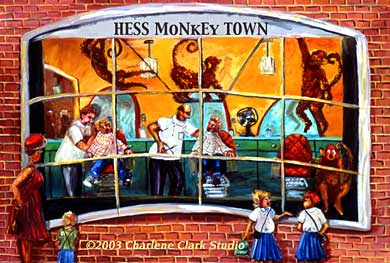 Anybody remember this place? Above is the only picture I’ve found referencing Monkey Town. It’s by local artist Charlene Clark, who is a visual archivist of Baltimore’s “gone but not forgotten” oddball lore (Enchanted Forest, Gino’s, Little Tavern, Cloverland Farms Milk, etc.).

In his Streetpolo blog, W.O.F. recalls that Hess Monkey Town was the barber shop next to the Hess Shoes store in the Edmondson Village shopping center, one that had real caged monkeys monkeying around in the store:

“…I recall hittin’ Monkey Town for the occasional haircut as a young kid. There was a special carpeted ramp from which to view the monkey-shines. The monkeys held one’s attention away from the fact that you were getting a hair-ectomy (and as a very young kid, I hated haircuts). Pretty entertaining, all right, and next to a Hess Shoes store. There was a Hochschild Kohn department store a few doors down, and a big ol’ Hecht Company across the street, next to a cafeteria we used to hit on the occasional Sunday after church.

It’s all gone now as the City and its blight spread out to the west along U.S. Route 40. The department store chains have fallen one by one, leaving, basically, Macy’s. Maybe there is a renaissance going on in that area; I hope so, as Edmondson Village was pretty quaint. But I think the era of the monkey-festooned barbershop is pretty much over.”

Ah yes, the glory days are over. According to Baltimore Style’s online “Department Store Timeline,” Edmondson Village – developed by Jacob and Joseph Meyerhoff and opened in 1947 – was one of the first regional suburban shopping centers built on the East Coast, and was home to Baltimore’s first suburban department store, Hochschild Kohn.

“Built in the Williamsburg style and including a “parking plaza” for 800 automobiles, the center is called “unique in American city planning” by the Evening Sun. Besides the first Hochscild’s branch, the center includes Whelan’s Drugs, Hess Shoes, Food Fair, the Dugout Restaurant, the Princess Shop, a bowling alley, movie theater and a community meeting room.”

In his “You’re from Bawlmer if…” column, the Baltimore Sun’s Dan Rodericks adds that, in addition to the monkeys, the Edmondson Village Hess Shoes also had large “rocking” horses to ride and an X-ray machine to see your toes in your shoes.

Even the Hess Shoes by me had the same Disneyland mentality – I recall slides and rocking horse ponies to distract kids at the Belvedere Square location, as well as a barbershop (but no monkeys!). Alas, my old Hess Shoes store is now home to the rather pricey Shoo-Fly Diner restaurant.

Addendum: On July 3, 2014, Jimbo Woodrow Buckler posted pictures of the “Sinclair Dinosaurs” visiting Eastpoint Mall to the “You Grew Up in Essex, MD If You Remember” Facebook page, as shown below. Dino’s friends were along for the ride at Eastpoint Mall. Reader Brian Dasch: “I am so glad that I was able to supply the photos of the dinosaurs. I lived in Colgate, and going to Eastpoint was am adventure. BTW I’m the little one in the front.” These creatures stomped through the Eastpoint Mall in the mid-1960s. The dinosaurs were originally part of the “Dinoland” exhibition at the 1964 World’s Fair in New York and afterwards made appearances at Sinclair Gas & Oil stations – whose logo was a Brontosaurus named “Dino” and whose oil cans proclaimed that their  fossil fuels were “mellowed a hundred million years” – around the country. Today known more correctly as  an Apatosaurus, in the 1960s the 70-foot “Dino” traveled more 10,000 miles through 25 states and 38 major cities – stopping at shopping centers and other venues where crowds of children were introduced to the wonders of prehistory, courtesy of Sinclair’s “Dino Tour.” The East Coast Sinclair stations were later bought by BP, whose logo wasn’t nearly as cool. Alas, corporate acquisition killed the dinosaurs, at least ’round these parts.

8 Responses to When Animals Ruled the Malls