A Good Cow Electrocuted in Baltimore (1901)

Scott’s note: Mary Nickel was my great-great-great grandmother, the first of the Nickels to come to Baltimore from Bavaria. She operated a dairy farm near Dundalk. My mother Mary Jacqueline was named after her. A valuable cow, owned by Mrs. Mary Nickel, proprietress of the Point Breeze Dairy Farm, near Colgate creek, was electrocuted yesterday morning in a pasture field on the farm. Two other cows received shocks, but escaped serious injury.

A barbed-wire fence that had become charged with electricity in some unknown way caused the cow’s death. The animal had placed her head through the fence to reach grass on the other side when it received the shock which caused death. The other cows came  into contact with the fence, but were able to jump away before they had been seriously burned. The first cow’s neck was terribly burned by the current. 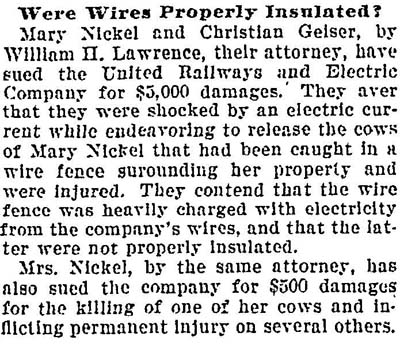 Mary Nickel and Christian Geiser, by William H. Lawrence, their attorney, have sued the United Railways and Electric Company for $5,000 damages. They aver that they were shocked by an electric current while endeavoring to release the cows of Mary Nickel that had been caught in a wire fence surrounding her property and were injured. They contend that the wire fence was heavily charged with electricity from the company’s wires, and that the latter were not properly insulated.

Mrs. Nickel, by the same attorney, has also sued the company for $500 damages for the killing of one of her cows and inflicting permanent injury on several others.

One Response to A Good Cow Electrocuted in Baltimore (1901)