The Poe Toaster may no longer raise a glass of cognac in salute and place three roses on his Westminster Church gravesite, but Edgar Allan Poe’s birthday is still remembered and honored by countless fans and admirers in the city where Poe lived, courted his future wife, and found his final resting place (alongside his aunt, Maria Clemm, and wife, Virginia). Indeed, the Edgar Allan Poe Birthday Celebration has been a perennial tradition in Baltimore since 1980. So, on Saturday, January 21, Poe groupie Amy Linthicum (wearing her stylish Edgar Allan Poe necklace) and I paid our belated best wishes to EAP by attending David Keltz‘s incredible one-man show (in costume and character, edited from Poe’s very own words) at the Baltimore Theosophical Society. (A portion of the proceeds from his three performances were donated to the fiscally challenged Poe House and Museum to help keep it open.)

BTS is an institution that I know little about, but their mission statement says it is dedicated to investigating “the nature of the universe and humanity’s place in it,” promoting understanding of other cultures, and being “a nucleus of universal brotherhood among all human beings” (a designation that I suppose includes even Republicans and telemarketers), so it sounds like an entirely reasonable and admirable group to me. 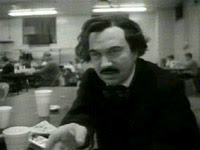 By contrast, I know a lot about David Keltz. The Baltimore actor gave his first performance as Edgar Allan Poe on Halloween night 1991 at Poe’s grave and has honed his craft in countless performances over the years (in addition to one-man shows celebrating D. H. Lawrence, H. L. Mencken, Captain John Smith and others), even essaying Poe as a bingo card player in Jane King and Jeff Alphin’s charmingly clever 16mm film short The Bingo Caller (as pictured above). And while I’ve seen many excellent Poe performances over the years by a who’s who of outstanding local actors – from Tony Tsendeas and Mark Redfield to Mark S. Sanders (star of the one-man play “A Portrait of Poe“) and John “Gomez” Astin‘s remarkable performance in Paul Day Clemens and Ron Magid’s play “Once Upon a Midnight Dreary” – none tops that of David Keltz. His is the face and his is the voice I associate with Poe, as if it’s indelibly stamped in my mind. That’s why, when I see him around town in his street clothes shopping at Eddie’s or milling about the American Visionary Art Museum’s gift shop, it always throws me for a loop (you just don’t expect to see Poe shopping for groceries or knick-knacks!).