A Rock Star Is Reborn 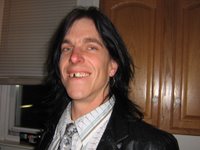 I ran into Todd Stachowski (pictured left) at celebrity plumber and erstwhile Atomic TV camerman Chris Jensen’s 50th Birthday Bash and the frontman of the long dormant but now revitalized Rock Stars gave me a copy of his death metal band’s first ever CD: 1+1=Death. Death Metal (or Black Metal, whatever you wanna call it) is not really my cup of tea because I’m more a twee pop wuss, but I gotta admit: It’s great!

Recorded at Orion Sound Studios in January 2006, it has a sound as thick and heavy as I imagine Brontosaurus poop would be, and Todd’s hoarse Norse vocals have never sounded more Satanic or more in need of throat lozenges (in fact, his voice is exactly how I imagine Road Warrior‘s Lord Humongus – the Ayatollah of Rock ‘N’ Rolla – would sound if he fronted a band). Beautifully illustrated by Stachowski himself (a triple-threat artist who can write, draw and play music), 1+1=Death is equal parts humor and outrage, like Todd himself, and (again like Todd) is always entertaining. Todd wrote all ten songs and plays guitar and bass, while Tasha Levine pounds the skins and longtime collaborator (and live performance madman) Tony Himlin (pictured above right) contributes backing vocals. The resulting music has true cross-over potential, as I can see it entertaining metalheads at Dundalk’s Zu as well as being put to use by the U.S. military to torture high-value detainees at post-Abu Ghraib secret holding cells in Iraq. It’s that good! 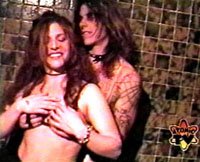 But the highlights for me are the sound bites from cult movies that Todd samples in between songs. Always clever and to the point, like the Hairspray soundbite that precedes Todd’s homage to big-haired East Bawmer hons, “Hair Hopper,” and the Joe Pesci sample from Raging Bull – “You gotta shot. If you win you win, if you lose you still win. You just gotta get down to 155 pounds you fat bastard. Just stop eating!” – that leads into “No Way To Win.”

Things start off with a real punch in “DW730W,” the most commercial-sounding Rock Stars metal song ever (written about a box label!), with Todd sampling some dialog from a fight film (“You can hit him as hard as you have the God-given ability to hit…The people who make the rules intended for you to hit ’em hard!”). The song also also provides the CD’s title, with its classic New Math equation:

Todd never did like math. I also like the romantic bickering dialog that precedes “Yer Gonna Git It,” which sounds like it’s from some biker flick, “Get out! If you don’t drag your ass out that door I’m gonna cut you…I’m gonna cut your ass!” This is followed by such old Rock Stars’ chestnuts as “Cat” (a deeply symbolic paen to female genitalia highlighted by Tasha Levine’s great cowbell-driven beat), “Giant Rat” (no doubt about Todd’s housemates in Armistead Gardens) and the very poppy “Hair Hopping” (this is my favorite tune, and it’s the one song in which Todd drops his Lord Humongus voice – he should try to get it on the soundtrack of the new Broadway-version Hairspray movie because it would be perfect there). I love the soundbite for “Giant Rat,” too: “That thing is dangerous, it took my child. Now I’m gonna see to it that I destroy it!” Newer songs, at least new to these ears, are “Leroy, Loretta & Hector,” “Operation,” “The Irresistable Force Meets the Immovable Object” and “Move Your Feet” (which has the great lines: “Sally was a bar stool/At least she looked the part/Born with a perfect body/She had a face like abstract art”). And people, I’m here to tell you it’s all good! 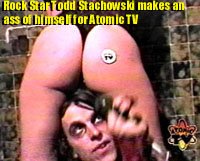 Der Todesking is back! Todd the former Shock Wave music scribe is writing reviews again, Todd the cartoonist is drawing toons again (on the Internet now), and The Rock Stars are gigging again. Be sure to check out their CD. I’ll post more info on how to get the album when I find out from Todd where it’ll be available.

Todd Stachowski and/or The Rockstars appeared in the following Atomic TV episodes:

And the Rock Stars now have a page on MySpace:

Following is a reprint of my review of The Rock Stars that appeared in the Baltimore City Paper‘s NO COVER music column circa 1996.

When local music magazine Shock Wave washed up in the Spring of ’95, main scribe/cartoonist Todd Stachowski didn’t know what to do with himself. Doing every drug known to man and watching every Harvey Keitel movie known to his local video store just wasn’t enough to stem his growing restlessness. Sure, City Paper‘s 1994 Best of Baltimore awards for “Best Anti-Music Critic” and “Best Politically Incorrect Cartoonist” looked nice hanging on his wall, but Todd Stachoswki the Working Class Renaissance Man (construction worker/roofer/forklift operator by day, artist/writer/rocker by night) needed a new audience to shock with his tongue-in-chic observations about Alf, child molestation, Satan worship, sexual perversion and recreational drug abuse.

“When Shock Wave went under, my megalomania was not being satiated,” the 26-year-old Essex native explains. “So I was forced to find another way to make people think I’m a genius.” Enter The Rock Stars, his humbly named “party metal” band that combines over-the-top songwriting (topics range from giant rats & hairspray to coprophilia & genital mutilation), outlandish glamrock costumes and between-song comedy skits to create an “extravaganza” for the audience. Since debuting at a Halloween party last Fall, the Dundalk-based Rock Stars – Stachowski on guitar & vocals, Fernando Garcia on lead guitar, fellow Shock Wave crony Joe Tricario on bass and Grace Slaymaker on drums – have played a half-dozen gigs around town at venues like Café Tattoo, Memory Lane and The Savoy, fine-tuning the metal-edged songs and comedy bits to the point where they’ve gotten a rep for being a fun “act,” and not just another rock band. After all, what other local band performs the “Mr. Yuk” theme on request-death metal style even-or feeds the audience with chicken wings?

That distinction is fine with Stachowski, who considers himself more of an entertainer that a musician, anyway. (“I can’t even barely tune my guitar,” he readily admits. “The only way I can tune an electric guitar is by the wave on the distortion; when it stops buzzing, I figure it’s in tune.”) Though he writes all the songs and is a competent rhythm guitarist, he’s much more concerned with how the band looks than with how it sounds. And make no mistake, the Rock Stars-in mascara, eyeliner and leopard-skin spandex everything-look marvelous. In fact, they looked so out of place when they opened the Erika Frazier Benefit show in January at Memory Lane-local mecca for the baseball-cap and flannel shirt-wearing Urban Hipster Set-that no one got the joke when Stachowski stepped to the mike and asked, “You all ready to hear some Poison?”

“People don’t want to come to a show and not be entertained,” explains Stachowski. “They don’t want to see some guys in their work clothes just standing there playing guitars. I mean, big deal. That takes a lot of fucking thought.”

By contrast, Stachowski puts a lot of fucking thought into everything the Rock Stars do on stage, especially the comedy skits (or “commercials,” as he calls them) that serve as thematic lead-ins to various numbers. Stachowski credits long-time friend and actor Tony Hemlin with teaching him the importance of theatrics. In fact, Hemlin’s turn as a Bible-toting evangelist who tries to save the Rock Stars (only to be converted to devil worship as the band seques into “Let’s All Just Hail Satan”) is one of the highlights of the show. But Stachowski’s regular comic foil is childhood chum Joe Tricario, who manages to steal the occasional thunder from his bud in bits like the Stovetop commercial parody:

Todd: “Hey Jimmy, I heard your Mom’s making Stovetop for dinner tonight.”
Joe: “Yeah, she is. You coming over?”
Todd: “I dunno, ’cause my Mom says your Mom’s Stovetop tastes like the shit she takes in the toilet.”
Joe: “Yeah, well my Mom says that your Mom fucks the dog down the street ’cause your Dad don’t know how to fuck and his dick is smaller than the dog’s.”

In another skit, Tricario takes on the demeanor of a lip-smacking redneck reminiscing about the glory days of glamrock: “Boy, that David Bowie,” he drawls in a thick Deliverance accent, “He sure looked golddurn pretty in all that girly glitter.”

But no Rock Stars performance is complete without the obligatory reference to Alf, who is the most important role model (after Harvey Keitel) in Stachoswki’s life. “Alf was one of the best sitcoms ever made, a great show to get fucked up on drugs to,” he enthuses, though he’s convinced that the show also contains a disturbing undertone of child molestation. “The actor who portrays Willie is so sleazy, you know in real life he definitely molests children. He’s playing this wholesome father figure and you know he loves little Brian, not in the way a father loves his son, but in a more perverse way.”

So much for pop cultural obsessions. What about the Rock Stars sound? Stachowski would rather talk about the “show,” but if pressed will confess that musically he leans toward the more “Satan-y” strains of death metal, especially his idols Celtic Frost (whose “Procreation of the Wicked” is a staple of the Stars’ live set), and his singing likewise adheres to the low-octave, phlegmatic bellowing that’s characteristic of the genre. But he credits another idol, Lou Reed, with “inspiring the intellectualism in my lyrics.” This from a man who, yes, wrote something called “Cat (A Song About Pussy),” not to mention other self-explanatory songs like “Giant Rat,” “Hair Hopping” (an homage to big-haired East Baltimore girls) and “Let’s All Just Hail Satan.” OK, so maybe the songs are cartoonish and the music a little too familiar, but the presentation is anything but. The Rock Stars are good dumb fun. Nothing illustrates this ability to make the ordinary extraordinary than “DW730W,” a song about a label on a box that’s easily the best thing Stachowski has ever written.

“I saw that number when I was working in a warehouse and I couldn’t get it out of my head,” he recalls. “It was just so hummable that I had to write a song about it. It’s our math song .I hate math. All math is stupid.” That frustration with numbers results in Stachowski’s single funniest line, describing a headbanger’s mathematical angst: “Subtract yourself, ’till there’s nothing left/Divide by nothing: 1+1=Death.” Now that’s funny!

“Look, there’s other bands around that have better songs than us,” Stachowski admits, “But they ain’t entertainers. When you come see us, it’s not a concert. It’s a party.” So bring out the chicken wings and let the fun and games begin!

The Rock Stars appear at The Savoy on Saturday March 2 and at the Atomic Books Calvacade of Perversion sometime in April.